Dennis Mangan mocks "educator and designer Kelly Cobb," who "decided to make a man's suit only from materials produced within 100 miles of her home." An ancient designer who made his own suit was Hippias, of whom we read in [Plato], Hippias Minor (tr. Benjamin Jowett):

You said that upon one occasion, when you went to the Olympic games, all that you had on your person was made by yourself. You began with your ring, which was of your own workmanship, and you said that you could engrave rings; and you had another seal which was also of your own workmanship, and a strigil and an oil flask, which you had made yourself; you said also that you had made the shoes which you had on your feet, and the cloak and the short tunic; but what appeared to us all most extraordinary and a proof of singular art, was the girdle of your tunic, which, you said, was as fine as the most costly Persian fabric, and of your own weaving.

Daniel Defoe's Robinson Crusoe by necessity made his own clothes from locally produced materials:

I had a great high shapeless cap, made of a goat's skin, with a flap hanging down behind, as well to keep the sun from me as to shoot the rain off from running into my neck, nothing being so hurtful in these climates as the rain upon the flesh under the clothes.

I had a short jacket of goat's skin, the skirts coming down to about the middle of the thighs, and a pair of open-kneed breeches of the same; the breeches were made of the skin of an old he-goat, whose hair hung down such a length on either side that, like pantaloons, it reached to the middle of my legs; stockings and shoes I had none, but had made me a pair of somethings, I scarce knew what to call them, like buskins, to flap over my legs, and lace on either side like spatterdashes, but of a most barbarous shape, as indeed were all the rest of my clothes.

I had on a broad belt of goat's skin dried, which I drew together with two thongs of the same instead of buckles, and in a kind of a frog on either side of this, instead of a sword and dagger, hung a little saw and a hatchet, one on one side and one on the other. I had another belt not so broad, and fastened in the same manner, which hung over my shoulder, and at the end of it, under my left arm, hung two pouches, both made of goat's skin too, in one of which hung my powder, in the other my shot. At my back I carried my basket, and on my shoulder my gun, and over my head a great clumsy, ugly, goat's-skin umbrella, but which, after all, was the most necessary thing I had about me next to my gun. 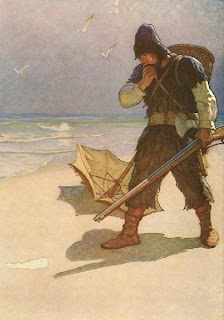 Henry David Thoreau did not make his own clothes, but was more concerned with utility than beauty in what he wore (Journal, May 8, 1857):

Within a week I have had made a pair of corduroy pants, which cost when done $1.60. They are of that peculiar clay-color, reflecting the light from portions of their surface. They have this advantage, that, being very strong, they will look about as well three months hence as now -- or, as ill, some would say. Most of my friends are disturbed by my wearing them.

The citizens of Concord were apparently more than once shocked by the outlandish garb of the Thoreau family. Walter Harding tells this story about Thoreau's mother in The Days of Henry Thoreau (New York: Knopf, 1965), p. 350:

In 1857 his mother at the age of seventy, wearing bright yellow ribbons on her bonnet, called on Mary Moody Emerson. During the entire conversation Miss Emerson kept her eyes tightly shut and when Mrs. Thoreau got up to leave, she remarked: "Perhaps you noticed, Mrs. Thoreau, that I closed my eyes during your call. I did so because I did not wish to look on the ribbons you are wearing, so unsuitable for a child of God and a person of your years."