Appointment With a Beech Tree

Thanks to Peter Watson, who responded to Beeches and Bears by drawing my attention to Richard Mabey's new book Beechcombings: The Narratives of Trees, scheduled for publication by Chatto and Windus on October 4.

The European beech is a different species (Fagus sylvatica) from the American (Fagus grandifolia). John Burroughs (An October Abroad, III: A Glimpse of France) preferred the European variety:

I was glad to see my old friend, the beech-tree, all along the route. His bole wore the same gray and patched appearance it does at home, and no doubt Thoreau would have found his instep even fairer; for the beech on this side of the Atlantic is a more fluent and graceful tree than the American species, resembling, in its branchings and general form, our elm, though never developing such an immense green dome as our elm when standing alone, and I saw no European tree that does. The European elm is not unlike our beech in form and outline.

The reference to Thoreau and the instep of the beech comes from Thoreau's Journal (Nov. 7, 1851):

No tree has so fair a bole and so handsome an instep as the beech.

Thoreau also uses the word instep when describing the beech in spring time (Journal, May 20, 1853):

The beech is already one of the most densely clothed trees, or rather makes a great show of verdure from the size of its fully expanded light-green leaves, though some are later. The fresh shoots on low branches are five or six inches long. It is an interesting tree to me, with its neat, close, tight-looking bark, like the dress which athletes wear, its bare instep, and roots beginning to branch like bird's feet, showing how it is planted and holds by the ground. Not merely stuck in the ground like a stick. It gives the beholder the same pleasure that it does to see the timbers of a house above and around. Do they blossom here? I found nuts, but apparently not sound, at Haverhill the other day, — last year's. There are some slender, perfectly horizontal limbs which go zigzagging, as it were creeping through the air, only two or three feet above the ground, over the side-hill, as if they corresponded to concealed rills in the ground beneath. 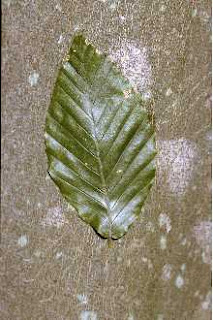 The beech leaves have all fallen except some about the lower part of the trees, and they make a fine thick bed on the ground. They are very beautiful, fine and perfect leaves, unspotted, not eaten by insects, of a handsome, clear leather color, like a book bound in calf, crisp and elastic. They cover the ground so perfectly and cleanly as to tempt you to recline on it, and admire the beauty of the smooth boles from that position, covered with lichens of various colors, green, etc. They impress you as full of health and vigor, so that their bark can hardly contain their spirits, but lies in folds or wrinkles about their ankles like a sock, with the embonpoint, wrinkles of fat, of infancy.

Instead of calling on some scholar, I paid many a visit to particular trees, of kinds which are rare in this neighborhood, standing far away in the middle of some pasture, or in the depths of a wood or swamp, or on a hilltop; such as ... the beech, which has so neat a bole and beautifully lichen-painted, perfect in all its details, of which, excepting scattered specimens, I know but one small grove of sizable trees left in the township, supposed by some to have been planted by the pigeons that were once baited with beechnuts near by; it is worth the while to see the silver grain sparkle when you split this wood...

Minott remembers how he used to chop beech wood. He says when frozen it is hard and brittle just like glass, and you must look out for the chips, for, if they strike you in the face, they will cut like a knife.

In the chapter on Former Inhabitants and Winter Visitors in Walden, Thoreau writes:

But no weather interfered fatally with my walks, or rather my going abroad, for I frequently tramped eight or ten miles through the deepest snow to keep an appointment with a beech tree...

The scientific and the popular names of this tree (fagus and beech) are actually related, despite looking so different. They are separate branches of the linguistic tree whose root is Indo-European bhāgo-.

Isidore of Seville, Etymologies 17.28, wrongly derives fagus from Greek φαγεῖν (phagein = to eat), because its nuts are edible. This incorrect etymology can be found even in modern times, on some otherwise reliable web sites, e.g. on the page for Fagus grandifolia on the web site of the Robert W. Freckmann Herbarium at the University of Wisconsin at Stevens Point.