Are there books after death? Yes, according to Revelation 20.12:

And I saw the dead, small and great, stand before God; and the books were opened: and another book was opened, which is the book of life: and the dead were judged out of those things which were written in the books, according to their works.

In the prologue to his play Rudens (5-21, tr. Henry Thomas Riley), Plautus says that the stars report to Jupiter on the actions of men, and Jupiter keeps written down in tablets who's naughty and who's nice:

Arcturus is my name. By night, I am glittering in the heavens and amid the Gods, passing among mortals in the day. Other Constellations, too, descend from the heavens upon the earth; Jove, who is the ruler of Gods and men—he disperses us here in various directions among the nations, to observe the actions, manners, piety, and faith of men, just as the means of each avail him. Those who commence villanous suits at law upon false testimony, and those who, in court, upon false oath deny a debt, their names written down, do we return to Jove. Each day does he learn who here is calling for vengeance. Whatever wicked men seek here to gain their cause through perjury, who succeed before the judge in their unjust demands, the same case adjudged does he judge over again, and he fines them in a penalty much greater than the results of the judgment they have gained. The good men written down on other tablets does he keep.

Most scholars think that Plautus closely translated the Greek original by Diphilus in the passage just quoted.

Erasmus in his Adagia discusses a proverb along the same lines (tr. R.A.B. Mynors):

Ex Iovis tabulis testis
Evidence from Jove's own file
Ἐκ τῶν Διὸς δέλτων ὁ μάρτυς, literally, the witness from Jove's own tablets. This was used in Greek of a reliable witness whose word could not be doubted. Lucian in his essay On Salaried Posts in Great Houses: 'And if anyone accuses you of adultery or pederasty, without more ado this is evidence, as they say, from Jove's own files.' The allusion, if I am not mistaken, is to the sheet of parchment on which the poets imagine that Jupiter records all that mortals do.

James Boswell, Life of Samuel Johnson, LL.D. (1778, aetat. 69), records a discussion on the subject of books after death:

BOSWELL. 'There is a strange unwillingness to part with life, independent of serious fears as to futurity. A reverend friend of ours (naming him) tells me, that he feels an uneasiness at the thoughts of leaving his house, his study, his books.' JOHNSON. 'This is foolish in —— A man need not be uneasy on these grounds; for, as he will retain his consciousness, he may say with the philosopher, Omnia mea mecum porto.' BOSWELL. 'True, Sir: we may carry our books in our heads; but still there is something painful in the thought of leaving for ever what has given us pleasure. I remember, many years ago, when my imagination was warm, and I happened to be in a melancholy mood, it distressed me to think of going into a state of being in which Shakspeare's poetry did not exist. A lady whom I then much admired, a very amiable woman, humoured my fancy, and relieved me by saying, "The first thing you will meet in the other world, will be an elegant copy of Shakspeare's works presented to you."' Dr. Johnson smiled benignantly at this, and did not appear to disapprove of the notion.

In Nouveau receuil d'ostéologie et de myologie, Jacques Gamelin (1738-1803) imagines what it might be like to read books after death: 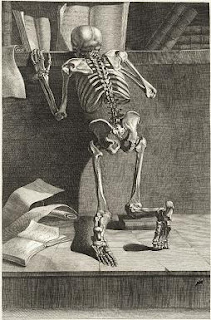