In Shakespeare's King Lear (3.4.131-144), Edgar in disguise is asked his name and introduces himself as follows:

Poor Tom, that eats the swimming frog, the toad, the tadpole, the wall-newt and the water; that in the fury of his heart, when the foul fiend rages, eats cow-dung for sallets, swallows the old rat and the ditch-dog, drinks the green mantle of the standing pool; who is whipp'd from tithing to tithing, and stock-punish'd and imprison'd; who hath had three suits to his back, six shirts to his body,

Horse to ride, and weapons to wear;
But mice and rats, and such small deer,
Have been Tom's food for seven long year.

A plant sometimes used as an ingredient in a salad (sallet) is cowslip. 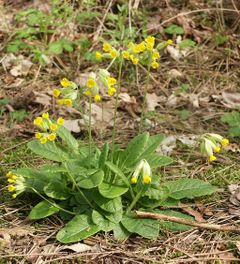 The American Heritage Dictionary explains "probably because some varieties are found in cow pastures."

So perhaps Poor Tom, by "cow-dung for sallets," means nothing worse than a cowslip salad.