From a letter of John Clare to John Taylor (now lost, but quoted by Taylor in his edition of Clare's Village Minstrel, and Other Poems (1821)):

My two favourite elm trees at the back of the hut are condemned to die — it shocks me to relate it, but 'tis true. The savage who owns them thinks they have done their best, and now wants to make use of the benefits he can get from selling them. O was this country Egypt and was I but Caliph, the owner would lose his ears for his arrogant presumption ... yet this mourning over trees is all foolishness — they feel no pains — they are but wood, cut up or not. A second thought tells me I am a fool: were people all to feel as I do, the world could not be carried on, — a green would not be ploughed ... This is my indisposition, and you will laugh at it ...

Clare's "foolish mourning" impelled him to write one of his most powerful lyrics, The Fallen Elm, which his biographer Jonathan Bate called "at once elegy and protest poem":

Old Elm that murmured in our chimney top
The sweetest anthem autumn ever made
And into mellow whispering calms would drop
When showers fell on thy many colored shade
And when dark tempests mimic thunder made
While darkness came as it would strangle light
With the black tempest of a winter night
That rocked thee like a cradle in thy root
How did I love to hear the winds upbraid
Thy strength without while all within was mute
It seasoned comfort to our hearts desire
We felt thy kind protection like a friend
And edged our chairs up closer to the fire,
Enjoying comforts that was never penned

At about the same time when John Clare was lamenting the destruction of elm trees near his cottage, John Constable was painting his magnificent Study of the Trunk of an Elm Tree: 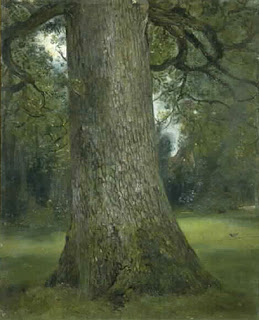