I've been enjoying your string of "November" poems. Here's another that might interest you. It's by the contemporary American poet, Samuel Menashe. He's quite old now, a World War II veteran. Here's "November":

That's from Collected Poems, published in 1986 by the National Poetry Foundation, University of Maine. It was published originally in The Many Named Beloved (1961).


I would have expected apples to be stored in the cellar, in particular the root cellar, but apparently storing apples in the attic was not uncommon. See this description in Mary Webb's Precious Bane (1924):

The roof came down to the floor all round, and all the beams and rafters were oak, and the floor went up and down like stormy water. The apples and pears had their places according to kind all round the room. There were codlins and golden pippins, brown russets and scarlet crabs, ciffins, nonpareils and queanings, big green bakers, pearmains and red-streaks. We had a mort of pears too, for in such an old garden, always in the family, every generation'll put in a few trees. We had Worcester pears and butter pears, jargonelle, bergamot and Good Christian. Just after the last gathering, the attic used to be as bright as a church window, all reds and golds. 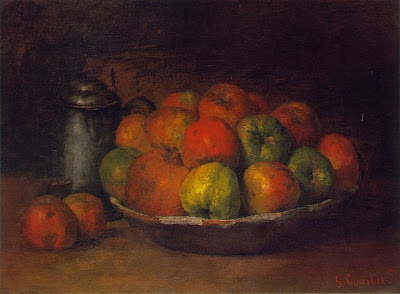