Much of the country is snowbound today, although Minnesota was spared the latest storm. I've been reading Snowbound: A Winter Idyl by John Greenleaf Whittier (1807-1892).

Whittier prefaced his poem with two quotations, one from Ralph Waldo Emerson's poem The Snow Storm and the other from a more recondite source:

"As the Spirits of Darkness be stronger in the dark, so Good Spirits, which be Angels of Light, are augmented not only by the Divine light of the Sun, but also by our common Wood Fire: and as the Celestial Fire drives away dark spirits, so also this our Fire of Wood doth the same."—Cor. AGRIPPA, Occult Philosophy, Book I. ch. v.

In Vittoria Perrone Compagni's edition of Cornelius Agrippa's De Occulta Philosophia Libri Tres (Leiden: Brill, 1992), the clauses which Whittier separated by a colon are reversed and not contiguous:

Whittier described the domestic "Fire of Wood" in Snowbound:

As night drew on, and, from the crest
Of wooded knolls that ridged the west,
The sun, a snow-blown traveller, sank
From sight beneath the smothering bank,
We piled, with care, our nightly stack
Of wood against the chimney-back,—
The oaken log, green, huge, and thick,
And on its top the stout back-stick;
The knotty forestick laid apart,
And filled between with curious art
The ragged brush; then, hovering near,
We watched the first red blaze appear,
Heard the sharp crackle, caught the gleam
On whitewashed wall and sagging beam,
Until the old, rude-furnished room
Burst, flower-like, into rosy bloom;
While radiant with a mimic flame
Outside the sparkling drift became,
And through the bare-boughed lilac-tree
Our own warm hearth seemed blazing free.

Later in the poem Whittier recurred to the cozy fire:

Shut in from all the world without,
We sat the clean-winged hearth about,
Content to let the north-wind roar
In baffled rage at pane and door,
While the red logs before us beat
The frost-line back with tropic heat;
And ever, when a louder blast
Shook beam and rafter as it passed,
The merrier up its roaring draught
The great throat of the chimney laughed;
The house-dog on his paws outspread
Laid to the fire his drowsy head,
The cat's dark silhouette on the wall
A couchant tiger's seemed to fall;
And, for the winter fireside meet,
Between the andirons' straddling feet,
The mug of cider simmered slow,
The apples sputtered in a row,
And, close at hand, the basket stood
With nuts from brown October's wood.

Towards the end of the poem Whittier recalled the winter joys of boyhood, among them the fire in the chimney:

Yet, haply, in some lull of life,
Some Truce of God which breaks its strife,
The worldling's eyes shall gather dew,
Dreaming in throngful city ways
Of winter joys his boyhood knew;
And dear and early friends—the few
Who yet remain—shall pause to view
These Flemish pictures of old days;
Sit with me by the homestead hearth,
And stretch the hands of memory forth
To warm them at the wood-fire's blaze!

Snowbound is a long poem, published as a book in itself by the Boston firm of Ticknor & Fields. One of the early editions was illustrated not with "Flemish pictures of old days," but with engravings after illustrations by Harry Fenn (1845–1911). Here is Fenn's illustration of the boys watching "the first red blaze appear:" 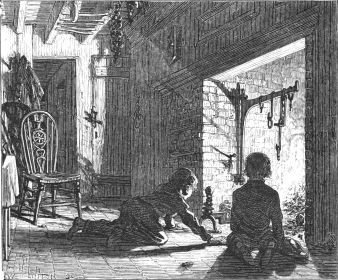 As I read Whittier's once popular poem, I thought that one might also illustrate it with the contemporary and once equally popular Currier and Ives prints of winter scenes. One of the artists whose paintings were used as the basis of the Currier and Ives prints was George Henry Durrie (1820-1863). In Snowbound, the children of the family gathered wood for the fire:

Meanwhile we did our nightly chores,—
Brought in the wood from out of doors...

Here's a painting by Durrie that shows a couple gathering wood in the snow: 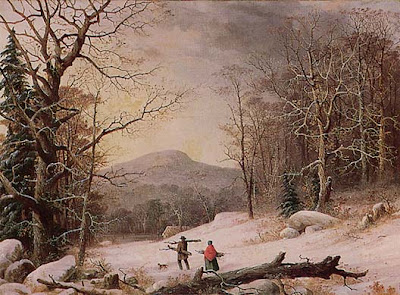 I've heard it said that winter landscapes are comparatively rare because artists want to paint from life, and it's just too darn cold in winter time to set up an easel outdoors and paint. You'd likely end up with frostbitten fingers. Nevertheless, there are those intrepid artists who do brave the cold and paint winter scenes. One of the most persistent was Walter Launt Palmer (1854-1932). Here is his Shining Stream: 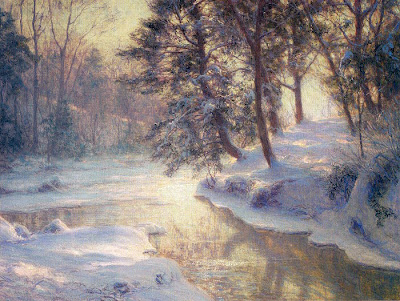 My house doesn't have a fireplace, and huddling for warmth next to the steam radiator doesn't seem so idyllic as Whittier's wood fire. Besides, I'm determined this winter to spend more time outside, so soon I'll bundle up, go for a walk in the cold (16 degrees Fahrenheit at the moment), and watch the "Divine light of the Sun" rise and chase away the "Spirits of Darkness."