According to the American Heritage Dictionary of the English Language, our word wilderness comes from "Middle English wildernesse, Old English wildēornes, from wildēor," that is, wilde dēor, or "wild beast." The Old English word dēor survives in modern English deer and is also cognate with German Tier (animal). Although nowadays deer means almost exclusively a hoofed ruminant of the Bambi variety, we can see the wider meaning in Shakespeare's

But mice, and rats, and such small deer,
Have been Tom's food for many a year.

Albert Bierstadt (1830-1902) was one of the foremost painters of America's wilderness, and it is fitting (from an etymological standpoint) that some of his paintings of wild scenes include deer. Looking at some of his paintings recently, I noticed deer in his Dogwood, Forest Sunrise, Mountain Lake, and (as one might expect from the name) Landscape with Deer After the Storm. I'm sure that more of his many landscapes feature deer as well. Here is Bierstadt's Forest Sunrise: 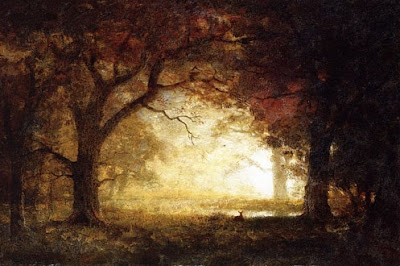 In The Conspiracy of Pontiac, Francis Parkman wrote:

To him who has once tasted the reckless independence, the haughty self-reliance, the sense of irresponsible freedom, which the forest life engenders, civilization thenceforth seems flat and stale. Its pleasures are insipid, its pursuits wearisome, its conventialities, duties, and mutual dependence alike tedious and disgusting. The entrapped wanderer grows fierce and restless, and pants for breathing-room. His path, it is true, was choked with difficulties, but his body and soul were hardened to meet them; it was beset with dangers, but these were the very spice of his life, gladdening his heart with exulting self-confidence, and sending the blood through his veins with a livelier current. The wilderness, rough, harsh, and inexorable, has charms more potent in their seductive influence than all the lures of luxury and sloth. And often he on whom it has cast its magic finds no heart to dissolve the spell, and remains a wanderer and an Ishmaelite to the hour of his death.

Within many a city dweller, I suspect, there is an entrapped wanderer panting for breathing room, and over such as these even a picture of the wilderness, like Bierstadt's Forest Sunrise, has power to cast a magic spell.