A man with a taste for being able to name what he sees will want not only to know the trees and the flowers; sooner or later he will take up the ferns, and I give him no assurance that he will ever get much beyond them. Not that there are so many. But the sirens were only three, amidst all those sailor's skulls.

There are only a little less than sixty ferns and fern allies in my region and it will not take a man a season to know them all, so few, so striking they are, so excellent the many handbooks of fern study in existence. But in the very circumscription of their bounds lies half the charm of the time you first take up a study of the ferns; like the pictures of Vermeer or the signatures of Button Gwinnet, there are just a few in the world, and all of them precious. Gone forever is the age of the ferns, when they ruled the earth. Now, as an experiment of evolution, they are finished; we see of their great subkingdom only the fragments that time has spared. It is that which gives the study of them its classic, its complete and homogeneous character, like the study of a rigid, highly inflected, sonorous and dead language. 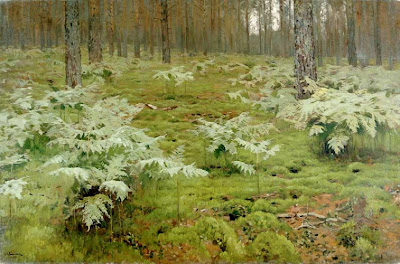 Isaak Levitan, Ferns
Button Gwinnet was one of the signers of the Declaration of Independence. I would have written sailors', not sailor's, but I left it as I found it.