The only magazine I subscribe to is Mother Earth News. In the April/May 2008 issue there is an article about the sounds of nature by Terry Krautwurst with the title "The Careful Art of Listening" (pp. 38-42). Apart from some mumbo-jumbo in the fifth paragraph ("Take deep, easy breaths. Focus entirely on the in and out of your breathing," etc.), it's an article worth reading.

I sometimes see people walking in the woods who are listening to a Walkman or an iPod or whatever. That might help to block out the sounds of airplanes screaming overhead or the dull roar of nearby automobiles, but it also blocks out "the whispers of yon pine tree that makes / low music o'er the spring" (Theocritus, Idyll 1.1-2, tr. C.S. Calverley, Ἁδύ τι τὸ ψιθύρισμα καὶ ἁ πίτυς, αἰπόλε, τήνα / ἁ ποτὶ ταῖς παγαῖσι μελίσδεται — the onomatopoeic word ψιθύρισμα, psithyrisma, suggests rustling and whispering).

Does any book have a more inviting title than The Wind in the Willows? Romantic composers used to give titles like Forest Murmurs, Woodland Whispers, Waldesrauschen, and the like to their Charakterstücke.

In Birds and Man, W.H. Hudson writes appreciatively of the sound of the wind in the forest:

To lie or sit thus for an hour at a time listening to the wind is an experience worth going far to seek. It is very restorative. That is a mysterious voice which the forest has: it speaks to us, and somehow the life it expresses seems nearer, more intimate, than that of the sea. Doubtless because we are ourselves terrestrial and woodland in our origin; also because the sound is infinitely more varied as well as more human in character. There are sighings and moanings, and wails and shrieks, and wind-blown murmurings, like the distant confused talking of a vast multitude. A high wind in an extensive wood always produces this effect of numbers. The sea-like sounds and rhythmic volleyings, when the gale is at its loudest, die away, and in the suceeding lull there are only low, mysterious, agitated whisperings; but they are multitudinous; the suggestion is ever of a vast concourse—crowds and congregations, tumultuous or orderly, but all swayed by one absorbing impulse, solemn or passionate. But not always moved simultaneously. Through the near whisperings a deeper, louder sound comes from a distance. It rumbles like thunder, falling and rising as it rolls onwards; it is antiphonal, but changes as it travels nearer. Then there is no longer demand and response; the smitten trees are all bent one way, and their innumerable voices are as one voice, expressing we know not what, but always something not wholly strange to us—lament, entreaty, denunciation.

One book in which I wouldn't have expected a description of forest sounds is The Edge of the Sea by Rachel Carson. But there is a fine paragraph in the third chapter that ends with a sylvan symphony:

One of my favorite approaches to a rocky seacoast is by a rough path through an evergreen forest that has its own peculiar enchantment. It is usually an early morning tide that takes me along that forest path, so that the light is still pale and fog drifts in from the sea beyond. It is almost a ghost forest, for among the living spruce and balsam are many dead trees—some still erect, some sagging earthward, some lying on the floor of the forest. All the trees, the living and the dead, are clothed with green and silver crusts of lichens. Tufts of the bearded lichen or old man's beard hang from the branches like bits of sea mist tangled there. Green woodland mosses and a yielding carpet of reindeer moss cover the ground. In the quiet of that place even the voice of the surf is reduced to a whispered echo and the sounds of the forest are but the ghosts of sound—the faint sighing of evergreen needles in the moving air; the creaks and heavier groans of half-fallen trees resting against their neighbors and rubbing bark against bark; the light rattling fall of a dead branch broken under the feet of a squirrel and sent bouncing and ricocheting earthward. 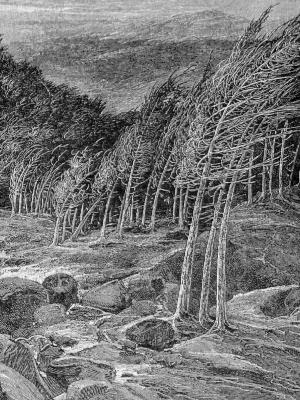 A Wind-Storm in the California Forest, after a sketch by John Muir
# posted by Michael Gilleland @ 4:36 AM