Andy Birkey, "National Lawyers Guild: What police seized was not 'weaponized' urine," The Minnesota Independent (Aug. 30, 2008), on the activities of police before the start of the Republican National Convention (RNC):

The National Lawyers Guild has released a statement about the items seized in police raids on Saturday targeting the homes of anti-RNC protesters. Of particular note: buckets of urine that Ramsey County Sheriff Bob Fletcher said were going to be used against police.

Two buckets contain grey water and were being used to flush toilets, to conserve water, in the upstairs bathroom. Both were identified in the inventory as "unidentified liquid." The third bucket, as shown by inventory sheets, was seized from illegal apartment over a garage in the rear. This apartment has been occupied for several years by a person unconnected to the house occupants or the RNC. No bathroom was in the illegal apartment and urine was collected in a bucket. This was listed as "unidentified yellow liquid" in the inventory sheets.

"Sheriff Fletcher does not have three buckets of urine. There are two buckets of gray water in the bathroom that were collected from a downstairs sink. It's part of a permaculture program to minimize impact on the environment. They disconnected the sink drainage from the sewer system and use it for toilet water, to use less water when they flush.

The other bucket was collected from an illegal garage apartment. The guy had been living there for years, and did not have a working toilet.

I wonder how long the buckets will be kept in the evidence locker. The Ramsey County Sheriff's Office is not in good odor at the moment — Sheriff Fletcher's crony, Timothy Conrad Rehak, and Sheriff Fletcher's spokesman, Mark Paul Naylon, were just convicted of theft of government funds and conspiracy to violate civil rights.

On the use of chamber pots as weapons in ancient times, see Aeschylus, fragment 180 Radt (tr. Herbert Weir Smyth):

There is the man who once hurled at me (nor did he miss his aim) a missile that caused them all to laugh, even the ill-smelling chamber-pot; crashed about my head, it was shivered into shards, breathing upon me an odour unlike that of unguent-jars.

This is similar to Sophocles, fragment 565 Radt (tr. Hugh Lloyd-Jones):

But in his anger he hurled at me the stinking chamber pot, nor did he miss; and the vessel, which did not smell of myrrh, broke about my head, and I was shocked by the unpleasing smell.

Diogenes Laertius, Lives of the Philosophers 2.36 (tr. R.D. Hicks), tells the following anecdote about Socrates and his wife Xanthippe, which is also preserved in other ancient authors:

When Xanthippe first scolded him and then drenched him with water, his rejoinder was, "Did I not say that Xanthippe's thunder would end in rain?"

Let us turn to the examples of those whose endurance we commend—for instance to that of Socrates, who took in good part the published and acted gibes directed against him in comedies, and laughed as heartily when his wife Xanthippe drenched him with foul water.

Xantippe was an ill-tempered woman, who even poured slops over his head.

A lost work of Seneca On Marriage (De Matrimonio) is probably the source of St. Jerome, Against Jovinianus 1.48 (tr. W.H. Fremantle):

On one occasion when he opposed Xantippe, who from above was heaping abuse upon him, the termagant soused him with dirty water, but he only wiped his head and said, "I knew that a shower must follow such thunder as that."

Chaucer alludes to the story in the Wife of Bath's Tale: 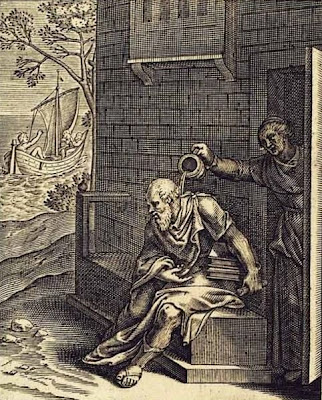