The Sauce and the Fish

Dull as the pictures, which adorn their halls,
They think all learning fix'd within their walls:
In manners rude, in foolish forms precise,
All modern arts affecting to despise;
Yet prizing Bentley's, Brunck's, or Porson's note,
More than the verse on which the critic wrote.

The ethical interest is strong in his Persius (1605), on which he had lectured at Geneva and Montpellier, and his commentary on the Stoic satirist, of which Scaliger said that the sauce was better than the meat, was reprinted in Germany as late as 1833, and has been ultimately merged in Conington's edition.

In a footnote on "the sauce was better than the meat," Sandys refers to Ep. 104 (unavailable to me). According to Scaligeriana sive Excerpta ex ore Josephi Scaligeri (The Hague: Vlacq, 1666), p. 64, what Scaliger actually said was, "Au Perse de Casaubon la saulce vaut mieux que le poison," that is, "In the Persius of Casaubon, the sauce is worth more than the fish."

One could classify commentaries into three categories. In the first category are commentaries alone, without the text being commented on, e.g. Nisbet and Hubbard on Horace's Odes, or G.S. Kirk et al. on Homer's Iliad. In the second category the texts are printed first, followed by the notes, e.g. J.E.B. Mayor on Juvenal, or James Diggle on the Characters of Theophrastus. In the third category the commentary appears below the text on the same page, e.g. R.C. Jebb on Sophocles, or Arthur Stanley Pease on Cicero's De Natura Deorum. Of these three categories, I find the third the most aesthetically pleasing, especially when there is a single line of the ancient text floating above two columns of commentary in smaller print. Here is an example of what I mean, from Pease's commentary: 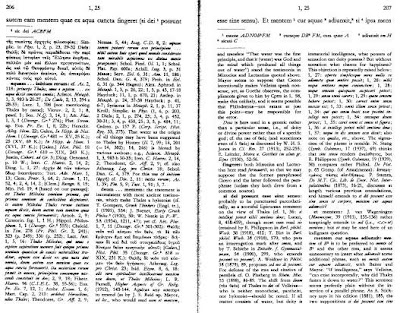 Pease described his motivation and method in compiling commentaries of this sort:

I will confess that I am by nature a collector, that I began with marbles and horse-chestnuts, advanced to postage stamps, continued with botany and books, and at all times have gathered facts and occasionally ideas.

These two latter items, in lack of sufficient cranial space for dead storage, I enter methodically on 3 x 5 slips of paper. When enough of a kind are amassed, they are outspread, classified, digested, written down, dehydrated, and lo! an article, or more rarely a book, to be perused by some lone watcher in Czechoslovakia or beside the Bay of Biscay.

We catch another glimpse of how Pease worked in the Preface to his commentary on Cicero's De Natura Deorum (p. vii, n. 3), where he quotes another great commentator, W. Headlam, Herodas (1922), p. ix:

There is only one way: learn your author by heart—every word, and then set to work to read. Many dull authors must be dredged.

If we analyze the state of scholarship at the beginning of the twentieth century, we recognize that the reaction since the twenties has been directed against three or four fairly distinct traits of traditional literary studies. There is, first, petty antiquarianism: "research" into the minutest details of the lives and quarrels of authors, parallel hunting, and source digging—in short, the accumulation of isolated facts, usually defended on the vague belief that all of these bricks will sometime be used in a great pyramid of learning. It is this characteristic of traditional scholarship that has elicited most derisive criticism, but it is in itself, a harmless and even useful human activity that dates back at least as far as the Alexandrian scholars and the medieval monks. There will always be pedants and antiquaries; and their services, properly sifted, will always be needed.

For the pure pleasure of reading, I prefer the pedantic and antiquarian labors of scholars like Pease to the critical theories of Wellek and his ilk.

I see from Pease's preface (p. viii) that two of his students were my teachers. So far as I can remember, they never mentioned Pease in my hearing.