Former Iowa Governor Tom Vilsack won unanimous confirmation from the Senate as U.S. Secretary of Agriculture on January 22, 2008, although outside of the Senate not everyone was overjoyed at his selection. Vilsack owns a 590 acre farm in Iowa, but he probably wasn't plowing his land, like Cincinnatus, when he was called to serve his country.

[4] It chanced that Quintius was just then ploughing a piece of land for sowing, he himself following the gaunt oxen that were breaking up the fallow; he had no tunic on, wore a small loin-cloth and had a cap upon his head. Upon seeing a crowd of people come into the field he stopped his plough and for a long time was at a loss to know who they were or what they wanted of him; then, when some one ran up to him and bade him make himself more presentable, he went into the cottage and after putting on his clothes came out to them.

[5] Thereupon the men who were sent to escort him all greeted him, not by his name, but as consul; and clothing him with the purple-bordered robe and placing before him the axes and the other insignia of his magistracy, they asked him to follow them to the city. And he, pausing for a moment and shedding tears, said only this: "So my field will go unsown this year, and we shall be in danger of having not enough to live on." Then he kissed his wife, and charging her to take care of things at home, went to the city.

[6] I am led to related these particulars for no other reason than to let all the world see what kind of men the leaders of Rome were at that time, that they worked with their own hands, led frugal lives, did not chafe under honourable poverty, and, far from aiming at positions of royal power, actually refused them when offered.

I tried without success to find a copy of Constantino Brumidi's fresco Calling of Cincinnatus from the Plow, which adorns the wall of the Committee Room on Agriculture (1st Floor, H-144) in the U.S. Capitol Building, but all I could find was an illustration in an article about its restoration (.pdf). So instead, here is a caricature of Cincinnatus by John Leech: 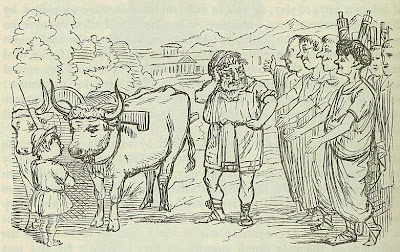 If Barack Obama had asked my opinion about the post of Secretary of Agriculture, I would have recommended poet, essayist, and farmer Wendell Berry.

I've been rereading Berry's Gift of Good Land: Further Essays Cultural and Agricultural (San Francisco: North Point Press, 1981). Berry uses draft horses on his 125 acre Kentucky farm for jobs such as spreading manure (Home of the Free, pp. 183-188, at 187), and he gave up a gas-powered scythe for a human-powered one (A Good Scythe, pp. 171-175).

But don't neglect your garden.
Household economy
Makes family and land
An independent state.
Never buy at a store
What you can grow or find
At home—this is the rule
Of liberty, also
Of neighborhood. (And be
Faithful to local merchants
Too. Never buy far off
What you can buy near home.)
As early as you can,
Plant peas, onions, and greens,
Potatoes, radishes,
Cabbage and cauliflower,
Lettuce, carrots, and beets—
Things that will stand the frost.
Then as the weather warms
Plant squashes, corn, and beans,
Okra, tomatoes, herbs,
Flowers—some for yourself
And some to give away.
In the cornfield plant pole beans,
Pumpkins, and winter squash;
Thus by diversity
You can enlarge the yield.