I read largely without note or comment. After a man has made sufficient progress in a modern tongue to read it with a reasonable degree of fluency, he does not surround himself with commentaries, and dictionaries and grammars—certainly not for his first reading. If he finds a hard sentence, a strange word, a difficult allusion, he may work at it; but who would dream of treating a French or German booklet, such as Edmond About's Le Nez du Notaire, or Auerbach's Barfüssle, in the way in which most men go at an ancient classic of the same compass? What a man has to teach—ah, that is a different thing. No study can be too exhaustive. But what a man reads for his private delectation is not to be handled as David handled his foes. Yet that is what we are expected to do. We are expected to put the ancients under grammatical saws and under literary harrows and under critical axes, before we are allowed to enter upon the possession of such enjoyment as these processes have left. Willing enough to be taught in all that pertains to the science of my profession, I am not willing to repeat anybody's literary creed; and in order to form honest opinions, it is necessary to read in mass.

The classics teaching at that school was excellent, but somehow the classroom routine failed to satisfy, and I formed a resolution which I have always regarded as crucial. I decided that every day I would read privately a quota of Greek or Latin, one hundred lines of verse or four pages of prose in an Oxford Text. I started with four works, taking them in daily rotation: Sophocles' Oedipus Rex, Xenophon's Hellenica, the poems of Catullus, and Cicero's Catilinarian speeches. The reading was conducted on a system of my own devising. It proceeded sentence by sentence, with a dictionary and usually a translation and/or commentary for checking. The sentence would then be read aloud. At the end of a paragraph or other appropriate stopping-place the sentences covered would be read aloud consectutively. At the end of the day's ration I would traverse its contents in a mental review. I have recommended this method to many students, but I am not aware of any that adopted it. For me it worked like a charm. Naturally, the daily quotas were increased as time went on.

On other resolution I followed with very rare exceptions. I always started a work at the beginning and read on to the end. No skipping, no selections. 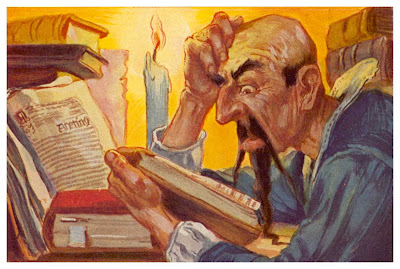