The leaves, though little time they have to live,
Were never so unfallen as today,
And seem to yield us through a rustled sieve
The very light from which time fell away.

A showered fire we thought forever lost
Redeems the air. Where friends in passing meet,
They parley in the tongues of Pentecost.
Gold ranks of temples flank the dazzled street.

It is a light of maples, and will go;
But not before it washes eye and brain
With such a tincture, such a sanguine glow
As cannot fail to leave a lasting stain.

So Mary’s laundered mantle (in the tale
Which, like all pretty tales, may still be true),
Spread on the rosemary-bush, so drenched the pale
Slight blooms in its irradiated hue,

They could not choose but to return in blue.

Marianne Moore weaves the same legend about Mary's mantle into her poem Rosemary:

Beauty and Beauty's son and rosemary -
Venus and Love, her son, to speak plainly -
born of the sea supposedly,
at Christmas each, in company,
braids a garland of festivity.
Not always rosemary -

since the flight to Egypt, blooming differently.
With lancelike leaf, green but silver underneath,
its flowers - white originally -
turned blue. The herb of memory,
imitating the blue robe of Mary,
is not too legendary

to flower both as symbol and as pungency.
Springing from stones beside the sea,
the height of Christ when he was thirty-three,
it feeds on dew and to the bee
'hath a dumb language;' is in reality
a kind of Christmas tree. 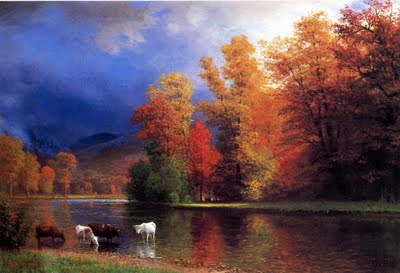 Albert Bierstadt, On the Saco
# posted by Michael Gilleland @ 5:29 PM