St. Martin and the Pine Tree

Today is Martinmas, the feast of St. Martin. A couple of days ago, Eric Thomson drew my attention to a tree-cutting episode in Sulpicius Severus, Life of St. Martin 13. By coincidence I had just encountered the same reference in Bernadette Filotas, Pagan Survivals, Superstitions and Popular Cultures in Early Medieval Pastoral Literature (Toronto: Pontifical Institute of Mediaeval Studies, 2005 = Studies and Texts, 151), p. 68, n. 13. Here is an English translation by Alexander Roberts of the passage from Sulpicius Severus, followed by the original Latin:

Again, when in a certain village he had demolished a very ancient temple, and had set about cutting down a pine-tree, which stood close to the temple, the chief priest of that place, and a crowd of other heathens began to oppose him. And these people, though, under the influence of the Lord, they had been quiet while the temple was being overthrown, could not patiently allow the tree to be cut down. Martin carefully instructed them that there was nothing sacred in the trunk of a tree, and urged them rather to honor God whom he himself served. He added that there was a moral necessity why that tree should be cut down, because it had been dedicated to a demon. Then one of them who was bolder than the others says, If you have any trust in your God, whom you say you worship, we ourselves will cut down this tree, and be it your part to receive it when falling; for if, as you declare, your Lord is with you, you will escape all injury. Then Martin, courageously trusting in the Lord, promises that he would do what had been asked. Upon this, all that crowd of heathen agreed to the condition named; for they held the loss of their tree a small matter, if only they got the enemy of their religion buried beneath its fall. Accordingly, since that pine-tree was hanging over in one direction, so that there was no doubt to what side it would fall on being cut, Martin, having been bound, is, in accordance with the decision of these pagans, placed in that spot where, as no one doubted, the tree was about to fall. They began, therefore, to cut down their own tree, with great glee and joyfulness, while there was at some distance a great multitude of wondering spectators. And now the pine-tree began to totter, and to threaten its own ruin by falling. The monks at a distance grew pale, and, terrified by the danger ever coming nearer, had lost all hope and confidence, expecting only the death of Martin. But he, trusting in the Lord, and waiting courageously, when now the falling pine had uttered its expiring crash, while it was now falling, while it was just rushing upon him, simply holding up his hand against it, he put in its way the sign of salvation. Then, indeed, after the manner of a spinning-top (one might have thought it driven back), it swept round to the opposite side, to such a degree that it almost crushed the rustics, who had taken their places there in what was deemed a safe spot. Then truly, a shout being raised to heaven, the heathen were amazed by the miracle, while the monks wept for joy; and the name of Christ was in common extolled by all. The well-known result was that on that day salvation came to that region. For there was hardly one of that immense multitude of heathens who did not express a desire for the imposition of hands, and abandoning his impious errors, made a profession of faith in the Lord Jesus. Certainly, before the times of Martin, very few, nay, almost none, in those regions had received the name of Christ; but through his virtues and example that name has prevailed to such an extent, that now there is no place thereabouts which is not filled either with very crowded churches or monasteries. For wherever he destroyed heathen temples, there he used immediately to build either churches or monasteries.

A carving from Vézelay (Basilique Sainte-Marie-Madeleine, 12th century) illustrates this episode from the life of St. Martin: 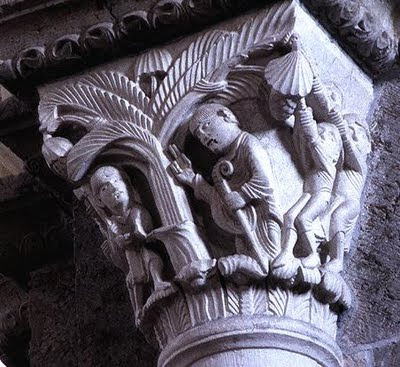 Related posts: The Geismar Oak; Bregalad's Lament; Petition of a Poplar; Cactus Ed and Arboricide; Views from the Center of Highgate Wood; Artaxerxes and Arboricide; When the Last Tree Falls; The Hamadryads of George Lane; Sorbs and Medlars; So Foul a Deed; Like Another Erysichthon; The Fate of Old Trees; Scandalous Misuse of the Globe; The Groves Are Down; Massacre; Executioners; Anagyrasian Spirit; Butchers of Our Poor Trees; Cruel Axes; Odi et Amo; Kentucky Chainsaw Massacre; Hornbeams; Protection of Sacred Groves; Lex Luci Spoletina; Turullius and the Grove of Asclepius; Caesarian Section; Death of a Noble Pine; Two Yew Trees in Chilthorne, Somerset; The Fate of the Shrubbery at Weston; Willows; Mourning Over Trees; The Trees Are Down; Sad Ravages in the Woods; An Old Saying; Strokes of Havoc; Maltreatment of Trees; Arboricide; An Impious Lumberjack; Erysichthon in Ovid; Erysichthon in Callimachus; Vandalism.