Bottle, coarse tumbler, loaf of bread,
Cheap paper, a lean long kitchen knife:
No moral, no problem, sermon, or text,
No hint of a Why, Whence, Whither, or If;
Mere workaday objects put into paint —
Bottle and tumbler, loaf and knife....
And engrossed, round-spectacled Chardin's
Passion for life.

Chardin is Jean-Baptiste-Siméon Chardin (1699-1779), and the still life is apparently in the National Gallery (number 1258): 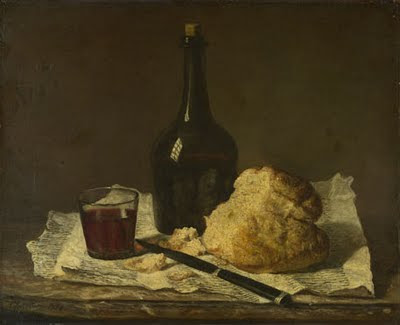 The simple subject of this picture—a loaf of brown bread, with a bottle of wine, spread out on a piece of old newspaper—takes us far away from the luxurious trifling of the Court painters. Chardin followed the path of frank realism, treating, however, all his subjects with refinement. To Dutch precision he added Gallic grace.

But National Gallery catalogues now attribute the painting to a 19th century "imitator of Chardin," i.e. to a forger. For "round-spectacled Chardin," see his self-portrait: 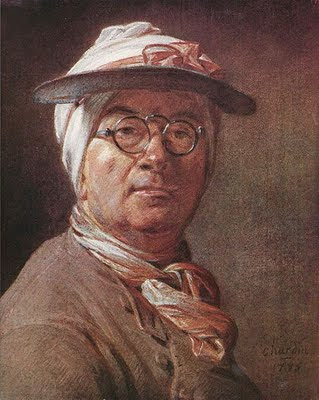