Traditional colonization began with ager publicus, land confiscated from Rome's defeated enemies or rebellious allies. The land expropriated by the triumvirs for the settlement of 41 was nothing of the kind. The 18 towns chosen for the confiscations were Roman towns, whose Roman citizens would suffer from the arbitrary judgment of the triumvirs. The towns had committed no crime, displayed no particular disloyalty; they were chosen simply for their wealth and the quality of their fields and houses....The 18 towns whose land was distributed to veterans in 41 were offered as a reward, dangled before the soldiers as payment for what consequently amounted to mercenary service under the triumvirs.

This is the background behind Vergil's first Eclogue, in which Tityrus wins an exemption from Octavian (one of the triumvirs) and saves his land from confiscation.

It is probably also the historical background of a poem attributed to Vergil, the Dirae (Curses), in which the speaker curses his own confiscated land, in the bitter hope that it will bring no pleasure or profit to the veteran to whom it was assigned. The dispossessed farmer grieves that the veteran will cut down the trees on his land, and also prays that the resulting timber will go up in flames before the veteran can use it (lines 26-36, tr. H. Rushton Fairclough):

O thou best of woods, oft sung in our playful songs and verses, thou beauteous in thy wealth of green, thou shalt shear thy green shade: neither shalt thou boast of thy soft boughs' joyous leafage, as the breezes blow among them, nor, O Battarus, shall it oft resound for me with my song. When with his axe the soldier's impious hand shall fell it, and the lovely shadows fall, thyself, more lovely than they, shalt fall, the old owner's happy timber. Yet all for naught! Rather, accursed by our verses, thou shalt burn with heaven's fires. O Jupiter ('twas Jupiter himself nurtured this wood), this must thou turn into ashes! 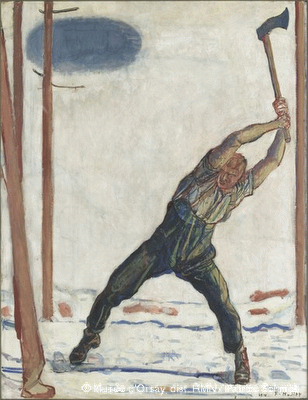