At his blog Underbelly, Buce posts the following:


From the selected curses of my cousin Dave:


May your kids all wear their baseball caps backwards at your funeral.

I wouldn't go quite so far as Theodore Dalrymple ("It is impossible to look intelligent or dignified, and difficult even to look civil, in a baseball cap") or Terrence O. Moore ("Part security blanket, part good-luck charm, these distinctive head coverings unite each barbarian with the rest of the vast barbaric horde"), but something about a baseball cap worn backwards does make the wearer look like a Neanderthal, even if he's really a Nobel Prize winner. Catchers wear them backwards so the visor doesn't interfere with the protective mask, but no one else has an excuse.

Some say that outfielder Ken Griffey started this odious custom, but George Will pointed out that Holden Caulfield (in J.D. Salinger's Catcher in the Rye) boasted, "I swung the old peak round to the back." Catcher in the Rye was first published in 1951, and Ken Griffey wasn't even born until 1969.

This practice started long ago, perhaps as early as the nineteenth century. The first stanza of "The Preacher's Boy" by American poet James Whitcomb Riley (1849-1916) contains a description of a preacher's wayward son that includes the phrase "his cap-rim turned behind" (line 7). See The Complete Poetical Works of James Whitcomb Riley (Garden City: Garden City Publishing Co., 1941), p. 284.

I've been searching, among works of art, for an early painting or photograph of someone wearing a baseball cap backwards, and this is the best I can find so far, not really what I'm looking for: 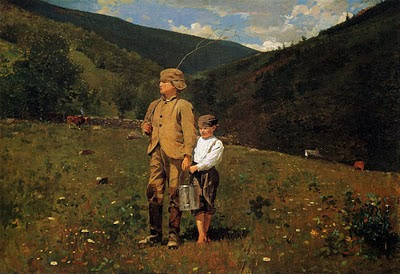 Maybe it's time for me to write out my funeral arrangements in detail. For a start, (1) no singing Kumbaya, and (2) no baseball caps worn backwards.