XLII.
Ovid's a rake, as half his verses show him,
Anacreon's morals are a still worse sample,
Catullus scarcely has a decent poem,
I don't think Sappho's Ode a good example,
Although Longinus tells us there is no hymn
Where the sublime soars forth on wings more ample;
But Virgil's songs are pure, except that horrid one
Beginning with "Formosum Pastor Corydon."

XLIII.
Lucretius' irreligion is too strong
For early stomachs, to prove wholesome food;
I can't help thinking Juvenal was wrong,
Although no doubt his real intent was good,
For speaking out so plainly in his song,
So much indeed as to be downright rude;
And then what proper person can be partial
To all those nauseous epigrams of Martial?

XLIV.
Juan was taught from out the best edition,
Expurgated by learned men, who place,
Judiciously, from out the schoolboy's vision,
The grosser parts; but, fearful to deface
Too much their modest bard by this omission,
And pitying sore this mutilated case,
They only add them all in an appendix,
Which saves, in fact, the trouble of an index;

XLV.
For there we have them all "at one fell swoop,"
Instead of being scatter'd through the pages;
They stand forth marshall'd in a handsome troop,
To meet the ingenuous youth of future ages,
Till some less rigid editor shall stoop
To call them back into their separate cages,
Instead of standing staring altogether,
Like garden gods—and not so decent either.

The "garden gods" are statues of Priapus. 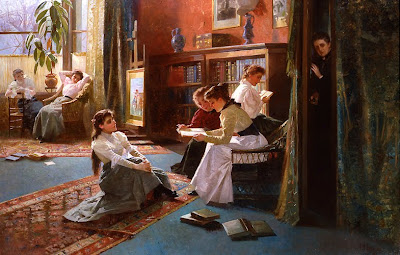