"Grammar," says an eminent academic authority, himself a Hellenist, "is to the average healthy human being the driest and deathliest of all the disciplines;" and grammarians have not been looked on with much favor in either ancient or modern times, at best as a higher type of hedge schoolmaster. Such a hedge schoolmaster figures in the Greek Anthology. His name has an aristocratic ring and recalls the great Arcadian seeress who taught Socrates the secret of true love. But Diotimus had come down in the world, and the mocking anthologist sings:

or, if he had lived to-day, and been utterly desperate, would perhaps have sung:

Diotimus, poor grammarian!
If my heart hath pitied e'er a one,
It is he,
Who, an almost centenarian,
Perched upon a "peak in Darien,"
Teaches little Jack and Mary Ann
ABC.

The epigram is by Aratus (Greek Anthology 11.437). Here is a literal translation:

I mourn for Diotimus, who sits amidst rocks, saying Alpha and Beta to the children of the Gargarians.

Much have I travell'd in the realms of gold,
And many goodly states and kingdoms seen;
Round many western islands have I been
Which bards in fealty to Apollo hold.
Oft on one wide expanse had I been told
That deep-brow'd Homer ruled as his demesne;
Yet did I never breathe its pure serene
Till I heard Chapman speak out loud and bold:
Then felt I like some watcher of the skies
When a new planet swims into his ken;
Or like stout Cortez when with eagle eyes
He star'd at the Pacific — and all his men
Look'd at each other with a wild surmise —
Silent, upon a peak in Darien. 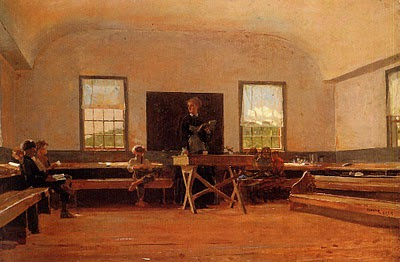