She had an idea that the son of a gentleman, if he intended to maintain his rank as a gentleman, should earn his income as a clergyman, or as a barrister, or as a soldier, or as a sailor. Those were the professions intended for gentlemen. She would not absolutely say that a physician was not a gentleman, or even a surgeon; but she would never allow to physic the same absolute privileges which, in her eyes, belonged to law and the church. There might also possibly be a doubt about the Civil Service and Civil Engineering; but she had no doubt whatever that when a man touched trade or commerce in any way he was doing that which was not the work of a gentleman. He might be very respectable, and it might be very necessary that he should do it; but brewers, bankers, and merchants, were not gentlemen, and the world, according to Miss Marrable's theory, was going astray, because people were forgetting their landmarks. 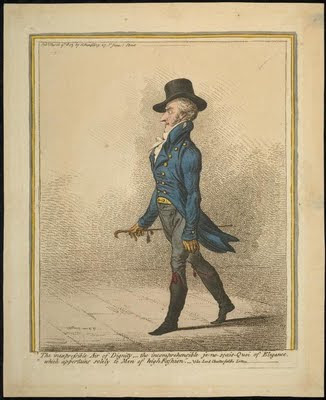 James Gillray, The Inexpressible Air of Dignity
# posted by Michael Gilleland @ 5:23 AM