Where to Read Vergil's Bucolics

In Part XII of The Anatomy of Bibliomania (1931; rpt. New York: Avenel Books, 1981), Holbrook Jackson asks and answers the question How Bookmen Conquer Time and Place. Topics include Of Reading Places (section II, pp. 236-239) and The Association of Book and Place (section III, pp. 239-241).

D.B.Wyndham Lewis, On Straw and Other Conceits (1927; rpt. Hartford: Edwin Valentine Mitchell; New York, Coward-McCann Incorporated [1929]), pp. 30-32, has some thoughts on this question:

It is evident that to extract the essential soul and flavour of certain books one should endeavour to read them in the exact surroundings in which they were conceived, or in surroundings as nearly similar as may be; for the clear air, the sky, the water are, as it were, mixed with the writer's mind and woven into the very stuff of his imaginings. But whereas there are plenty of books pointing out What To Read and Why To Read, there is as yet, I think, no guide showing Where To Read. I have therefore drawn up from my own experience, haphazard, a modest and sketchy list which may serve as the foundation for such a Guide, though it clearly touches only the edge of the fringe of a vast and absorbing subject.

SHAKESPEARE. One would naturally read Shakespeare in a Warwickshire meadow in buttercup time; or else in the Fitzalan Chapel at Arundel.

RONSARD. To derive the greatest solace from the poetry of Ronsard one must read him lying on the banks of the Loire, at about sunset of a June evening, upon the grass, with a flask of the wine of Vouvray, or Chinon, or Bourgueil at hand; and with the soft air and the murmur of flowing water there should be mixed the gracious voices of girls.

Some demand, in addition, a lute, and a distant voice singing "Bonjour mon coeur, bonjour ma douce vie," the words by Ronsard, the music by Orlando de Lassus.This seems (as Samuel Butler said about dumb-bells — see above) academic.

KIPLING (MR.). The works of this famous author are most profitably read in the Crystal Palace on Empire Day, during a massed Brass Band Contest; if that can be arranged.

CONGREVE naturally demands to be read in the Sunken Garden at Hampton Court, on the William-and-Mary side of the palace — not the Cardinal's.

HERRICK should be read in a Devon lane in the time of violets.

TCHEHOV. To extract the best from this author and his English imitators, their work should be read in a dimly lighted dissecting-room; the corpse rather damp and the surgeon and his assistants rather sick of it, in a moody, gaga sort of way.

RABELAIS must be read among the rich lands of the Chionnais in Touraine, on the edge of a white road with cornfields and vineyards on either side. But let there be a farmyard near, with a ripe and aromatic muck-heap in it, the scent of which must be borne to you on the wind; and let there be also loud bursts of rustic laughter and a bottle of Chinon.

One could swell the list indefinitely, in many cases with two, three, or four alternatives each. There is one English man of letters, for example, who holds stoutly that the only place to read the Bucolics of Vergil is at a café-table opposite the Bourse in Paris, when the money-grubbers are howling their damnedest. My own theory is that the Bucolics are best read in the barber's parlour at the Cosmopole, with a menial squirting costly unguents on the hair and the Rich all round one being polished and trimmed. Again, most of the modern "analytical" novelists need nothing better than a room filled with stale tobacco-smoke: but what kind of room? And again, there may be a law against reading Mr. M******* M***'s prose in the Elephant House at the Zoo. 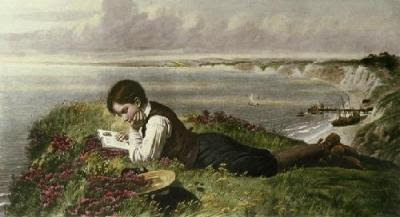