The Cedar and the Shrub

John Ogilby, Aesopic's or A Second Collection of Fables, Paraphras'd in Verse: Adorn'd with Sculpture, and Illustrated with Annotations (London: Printed by Thomas Roycroft for the Author, 1668), pp. 84-85 (Fab. XXXIII: Of the Cedar and the Shrub):

A Cedar whose tall Branches did extend
To kiss the Sky, and Roots to Hell descend,
Puff'd up with Pride, swoln with vain Folly big,
Owl'd with a bush and staring Periwig;
Which Madame May curl'd for his Summer Cap,
To drop off with the first Autumnal clap,
Thus proudly spake unto a neighbouring Shrub.

Thou inconsiderate, ill-manner'd Grub,
When I vouchsafe to look thus down on thee,
Scorn'st thou to stoop, and bow that Wooden Knee?
When by my kindness thou are happy made,
From Wind and Sun protected by my Shade!

Knowst thou not me, whose Arms build Tow'rs and Towns,
Whose Knees make floating Citys on the Downs;
The strongest Marble Arch without my Wood,
Ne'r stood the Violence of a second Flood;
If my huge Branches strengthen not the Frame,
Down comes the Structure like a Millers Damm!
Nay more, on me the Royal Eagle builds!
The Lion and his train that range the Fields,
When Boreas huffs, or scorching Phoebus burns,
My Leavy shadow to his Palace turns;

The Mexicans, as flying Fame reports,
Not only off, but in me build their Courts.

The vain Tree boasting thus, no end had made,
But that the Axe unto the Root was laid;
Then boystrous blows resound, and thundring strokes;
Such bring proud Cedars low, and sturdy Okes;

The Bush then seeing how her palsied Crown
Sunk by degrees, just ready to drop down,
Spake to the Dying, at her latest gasp,
In Deaths Convulsions trembling like an Asp.

Hadst thou been as Mean as I, th'hadst scap'd all Tax,
Nor hadst thou been Condemned to the Ax;
Thou that so late Contemn'st a Herricane,
Charg'd with Hail-shot, and Deluges of Rain;
Those Covenanting-brethren thirty two,
Winds that not only Threaten but can Doe,
that Spring and Fall, each Change of weather fly,
Not to the ruine only of the Sky,
But in their rage what e'r Menarchick, bear
O'r Sea and Land and sweep them through the Air;
Your Parts and Riches, that you so did crack,
Though Tempests could not, lay you on your back;
I Arm'd with Poverty, thus Mean and Low,
Defie the Hatchet and all Winds that blow.

MORAL.
Who have what e'r their wishes could devise,
Should ne'r the Poor and abject'st Worm despise:
When altering Times, and fickle Fortunes frown,
Brings oft the Proudest in a moment down.

The word "owl'd" in line 4 ("Owl'd with a bush and staring Periwig") puzzled me at first. My initial impulse was to emend—"crown'd" was a possibility, I thought, or perhaps "cowl'd," as I could find no explanation in the Oxford English Dictionary under "owl" as a verb. But Ian Jackson, who drew this poem to my attention, asked:

Have you noted that Captain Grose's Dictionary of the Vulgar Tongue (1785), gives s.v. Ivy:

Like an owl in an ivy bush, a simile for a meagre or weazle faced man, with a large wig, or very bushy hair.

Note the identical association of Owl, Bush and Periwig in Ogilby's fourth line.

A very lovely pine made mockery of a prickly bramble bush in a serious dispute touching their claims to beauty. The pine said it was unfair it should have to contend with such as no title brought by merit into its own class. "For my tapering trunk rises towards the clouds, and rears starward the lofty foliage of my tree-top; and when I am placed on the ship's open deck in the centre, the sails unfurled by the wind hang upon me. But you—everyone passes you by with scorn, because your growth of thorns gives you an ugly appearance." The bramble rejoins: "True, now you rejoice and all you profess is fair, and in your domineering way you take pleasure in my defects. But in that day when the threatening axe shall hew your fine limbs, how you would then wish that you had possessed my thorns!"

The fir tree and the bramble vied with one another. The fir tree praised herself in many ways: "I'm handsome, tall, and well-proportioned. I grow straight up; my top is neighbour to the clouds. I am the main pillar of the house, and the keel of the ship. How can you, a thistle, with so great a tree compare yourself?" The bramble answered her and said: "If you will call to mind the axes that are always cleaving you, to be a bramble will seem better even in your reckoning."

Every distinguished man not only has greater fame than lesser men but he also undergoes greater dangers.

In Ogilby's Aesopic's or A Second Collection of Fables, the fable of the Cedar and the Shrub is magnificently illustrated by Wenceslaus Hollar: 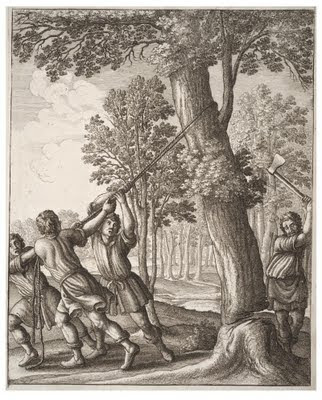 Richard Pennington, A Descriptive Catalogue of the Etched Work of Wenceslaus Hollar 1607-1677 (Cambridge: Cambridge University Press, 1982; rpt. 2002), p. 61 (no. 405), described the illustration thus: "The man on r. is chopping down a large tree, while three men are hauling on a rope passed round its trunk. A wood in backg."

In Edward Hodnett, Francis Barlow, First Master of English Book Illustration (Ilkley: Scolar Press, 1978), the plate appears as figure 67 on page 156 and is identified as Hollar's. Hodnett, p. 154, wrote: "The rhythmic arrangement of woodsmen in 'The Cedar and the Shrub' (fig. 67) creates one of Hollar's most original and dynamic illustrative interpretations."