'Brave, honest' William Cobbett has somewhere said that 'foot-notes' ought to be written 'fool-notes,' while Isaac d'Israeli has defended them. For myself, I prefer to distinguish. Where a foot-note reveals its writer's incapacity to incorporate all he has to say with the body of his text, I am with Cobbett; but as regards illustrative or detachable notes (by which mere references are not intended) I am with the author of the Curiosities of Literature. Indeed, I could almost go as far as Leigh Hunt in his high-pitched enthusiasm for Warton's Minor Poems of Milton. Of this he says: 'His edition of the minor poems of Milton is a wilderness of sweets. It is the only one in which a true lover of the original can pardon an exuberance of annotation; though I confess I am inclined enough to pardon any notes that resemble it, however numerous. The "builded rhyme" stands at the top of the page, like a fair edifice with all sorts of flowers and fresh waters at its foot. The young poet lives there, served by the nymphs and fauns.' (Indicator, lxiii.) 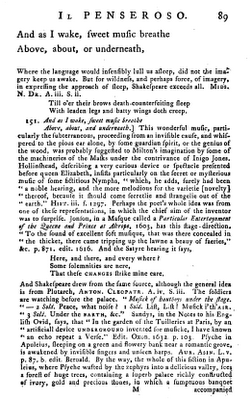 A page from Thomas Warton's edition of
Milton's Poems upon Several Occasions
(London: James Dodsley, 1785)
Related post: The Sauce and the Fish.