O happy the man who can spend his life with people like himself, and who, without feigning, without fear, without envy, and without ambition, reigns peacefully in his own poor household!

The miserable trouble of acquiring more does not tyrannize over his free inclinations, and his greatest desire, a desire without passion, reaches no further than his own inheritance.

He does not trouble himself with the business of others. His chief hope depends only on himself. He is his own court, his king, his benefactor, and his master.

He does not devour his wealth in a foreign country. He does not put his life in danger for others. And he would not want to be richer than he is.

From the 1559 edition, printed by Federic Morel:

O happy the man who can spend his life
Among his own kind: and who, without pretence,
Without fear, without envy, and in full content
Reigns peacefully at his own poor fireside.

The wretched trouble of acquiring more
Does not tyrannise over his affections,
His highest desire, a desire without passion,
Extends only to what his father had before him.

He does not bother with other people's affairs,
His main hope is for what is already there,
He is his own master in all that he does.

Happy is he who can spend his life with his own
kind, and who without any need for pretense,
and without ambition or eny, has the good sense
to live by the fireside he has always known,

untroubled by ambition's goad that distracts
from what his fathers and forebears always had
and were content with. He disdains the mad
passions of the madding crowd and the acts

of desperate men who scurry about in the street.
He is able to recognize what he has as sweet
and enjoy being the master in his own hall.

He does not risk what he has for the sake of applause
or even himself in some foreign cause.
To be richer? That doesn't matter to him at all.

O happy he, whose latter years are spent
Amongst his own, his intimates! who, free
Of lies, of fear, of jealous enmity,
Reigns in his humble dwelling, calm, content!

The base desire more and more opulent
To grow holds not his soul in thrall; for he
Sagely accepts what largesse destiny
Sees fit to grant him in his line's descent.

He troubles not with others' power or pelf,
His hopes depend on him alone, himself,
He his own court, patron, master is;

He wastes his fortune not on foreign soil,
He risks not harm for others' toil and moil,
And seeks no greater weath than what is his.

Oh, happy is he who can pass his days
Among his equals! And without deception,
Free of fear, or envy or ambition,
In his own home pursue his own quiet ways!

He never delves in the business of another,
He is court, king, favour, and his own master.
His expectations rest on himself alone.

He’ll not eat in a far land, as a stranger,
Nor for another place himself in danger:
Richer, in that there’s nothing more he’d own. 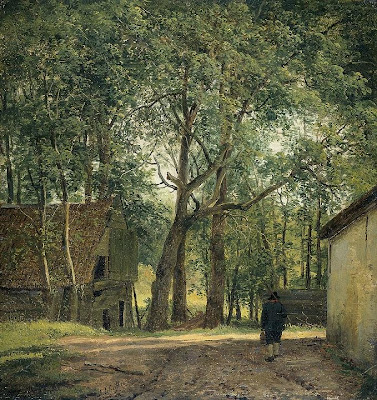