In Kathleen Warner Slane and M.W. Dickie, "A Knidian Phallic Vase from Corinth," Hesperia 62 (1993) 483-505, I came across a description of an apotropaic mosaic at the entrance of a 3rd century AD villa discovered in 1957 in the village of Skala on the Greek island of Kephallonia: "On the mosaic a young man clutches his throat with both hands and is attacked by four great cats" (p. 495). At the base of the mosaic is the following verse inscription (my rough translation, Greek text from Slane and Dickie):


O Envy, also this image of your destructive mind did a painter draw, which Krateros set in stone, not because you are esteemed among men but because, grudging the wealth of mortals, you donned this form. Stand then face to face before all, stand, wretch, bearing the hateful pattern of the wasting away of envious men.

Slane and Dickie say the inscription can be found in Supplementum Epigraphicum Graecum 19.409, and I think it is also in Inscriptiones Graecae IX 1², 4, 1498 (neither of which I have seen). There is a fuller discussion (unavailable to me) in K.M.D. Dunbabin and M.W. Dickie, "Invidia Rumpantur Pectora: The Iconography of Phthonos-Invidia in Graeco-Roman Art", Jahrbuch für Antike und Christentum 26 (1983) 7-37. There is also a black and white photograph (not a very good one) of the mosaic in Katherine M.D. Dunbabin, Mosaics of the Greek and Roman World (Cambridge: Cambridge University Press, 1999), p. 313, fig. 312. I found a better one at http://www.postmehome.com/pages/romanvilla/photo2.htm: 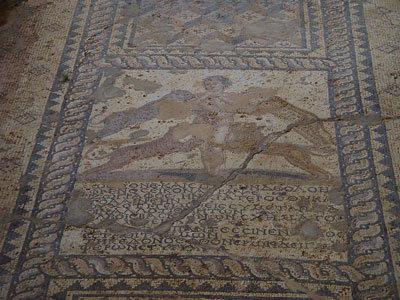 Envy was often represented strangling himself, e.g. Silius Italicus 13.584: "on this side Envy, squeezing his own throat with both hands" (hinc angens utraque manu sua guttura Livor). 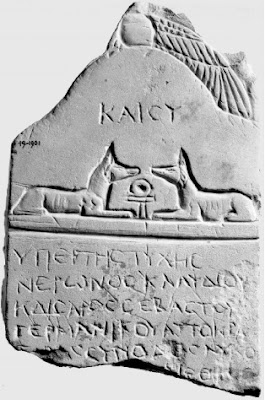 These Greek apotropaic phrases remind me of a schoolyard taunt popular when I was a small boy: "I'm rubber and you're glue. Everything you say bounces off me and sticks to you." With these phrases in mind, I wonder if καὶ σο[ί] could be read in the first line of the inscription on the Skala mosaic (note the break after CO in the photograph, first line of text), perhaps followed by a stop. If so, I would translate "O Envy, to you too! This image of a destructive mind did a painter draw," etc. The meaning would then be something like, "O Envy, may the punishment here depicted be turned against you, too!"