I collect books just as others store grain,
And bitterly complain I don't have enough granaries.
In order to make space for a myriad ancient men,
I end up building three more rooms.
The books then ask the man who stores them:
"When will you have time to read us, sir?"


A St. Louis Park bibliophile and his wife bought the house next door to tear it down and expand their own. Instead, they kept both houses, joined the two structures and turned an entire house into a library.

The Ainsworth house in St. Louis Park was being slowly consumed by books.

Massive bookshelves covered an entire wall in the living room. Another room upstairs had almost no visible wall space. Nearly every room in the house was outfitted with a bookcase, including the kitchen. Still, Louis Ainsworth's book collection threatened to overrun the property.

"What Louis couldn't fit on the shelves, he kept in cardboard boxes around the house," says Sue Ainsworth, the book collector's ever-patient wife. "I would tell him, 'Louis, why do you need 500 books on the Middle Ages?'"

When the Ainsworths met their breaking point, they did something even bibliophiles might consider drastic: They bought the house next door, added a two-story atrium to bridge the 15-foot gap between the houses, and converted most of the neighbor's house into a two-story library with cherry shelves, a mezzanine, fireplace and a rolling library ladder.

When Mrs. Laudator read this article in the newspaper, she suggested that we might want to do something similar. But our house doesn't really have all that many books. Here, by way of comparison, is just a small part of the collection of a friend: 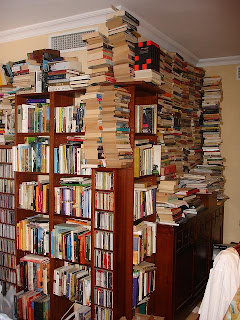 Or consider this, a tiny fraction of the books owned by another friend: 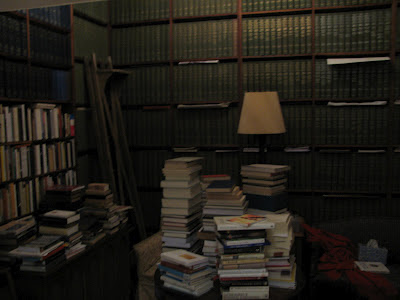