If All Are Flown, I Sulk

I thought you'd enjoy this charming letter by a 'country bookworm'. I came across it this afternoon in Recreations and Studies of a Country Clergyman of the Eighteenth Century: Selections from the Correspondence of the Rev. Thomas Twining, M.A., ed. R. Twining (London: John Murray, 1882), pp. 91-93:

I owe you an appendix to my last letter: I wish all debts were as willingly paid. I was much diverted last night at the opening of the two parcels that arrived in Mills's goods. I hope you saw the contents; there never was a more complete contrast. Out first comes Julius Caesar Scaliger; 'It should be Julius Caesar scavenger!' quoth I, to myself. But when the splendid back and the more splendid belly of the other book appeared, I started back. It was a perfect emblem of the unequal distribution of things in this world. Two things I have always hated—dirt and finery. The mixture is ten times worse than either separately; but when finery includes cleanliness it fairly deserves the preference to dirt—and so I like my beau book better than my sloven. Nay, there is a simplicity in the gilding of his back that likes me much, and is new to me. If the leaves had been green the book would have been within the bounds of the 'simplex munditiis'! One can never be in time for Payne! My principal lots were gone. Yet I lost no time. To do the fair thing, Payne ought not to begin selling till his catalogue has had time to reach his most distant correspondent. He gives us country bookworms no chance. Pray, when you walk that way, see if No. 4417 or 4418 (if not too fine) are to be had; for I am not worth an Apollonius Rhodius. If these are gone, let me have 1915, Horapollinis, &c. If all are flown, I sulk, and will look no farther. I am very well pleased with my Ernestus, though I am sorry it has been in the possession of a slovenly blockhead, who, I dare be sworn, has left more in the book than the book has left in him. I was disappointed to find that the edition is Clark's reprinted, with the addition of some short notes, and not numerous, of Ernestus. Still, as it has all Clark's notes, and Ernestus's added, and very good indexes, &c., it is a better edition, and I by no means repent of my purchase. While I think of it — if in glancing your eye over catalogues it should hitch upon Rymer's translation of Aristotle's Poetics, with Kapin's notes from the French, 1674, 8vo, buy it for me. A translator likes to see what others have done before him. I knew of this English translation but lately. Also, pray ask Elmsley if he has got Condillac's 'Essai sur l'Origine des Connaissances Humaines,' two small vols., an excellent metaphysical work, and which I must purchase some time or other. I am reading it, with much pleasure, upon Dr. Forster's recommendation. I will send your Virgilian MS., &c., by the coach on Wednesday, and with them a little book of Erasmus's which you may find useful among your auxiliaries. 'Est etiam in parvo munere, dantis amor.'...

There's a rather touching epitaph, composed by his friend Samuel Parr, at the end of the memoir prefacing the letters (which Sandys (vol. ii, p.421) also reprints in part in A History of Classical Scholarship): 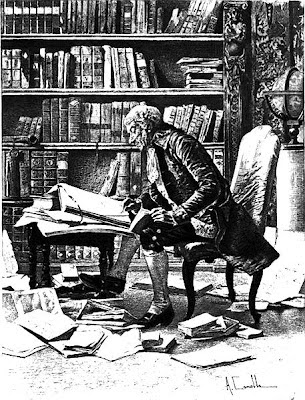 Engraving by A. Canella