To shield readers from material deemed obscene or offensive, editors and translators of volumes in the Loeb Classical Library series used to resort to a variety of tricks. For an excellent analysis see Philip Lawton, "For the gentleman and the scholar: sexual and scatological references in the Loeb Classical Library," in Stephen Harrison and Christopher Stray, edd., Expurgating the Classics: Editing Out in Greek and Latin (London: Bristol Classical Press, 2012), pp. 175-196. Lawton distinguishes the following methods:
What is the natural reaction of the reader to such tricks? The answer is in Selections from the Brief Mention of Basil Lanneau Gildersleeve, ed. C.W.E. Miller (Baltimore: Johns Hopkins Press, 1930), p. 52: "Unregenerate boys are especially fond of looking up the lacunae in expurgated editions."

In the essay on Juvenal in his book Classical Bearings (Berkeley: University of California Press, 1989), Peter Green tells about the great lengths to which he and some of his Sixth Form fellows at Charterhouse went to find out as much as they could about obscene passages omitted in bowdlerized school editions of the classics, for example Juvenal 1.39 (vetulae vesica beatae), much of Juvenal's sixth satire, all of Juvenal's second and ninth satires, etc.

They spent long hours of their free time in the well-stocked school library tracking down these naughty bits, poring over commentaries and lexicons, and trying to figure out what the censored passages meant. In the course of doing so they greatly improved their knowledge of Greek and Latin.

Green goes so far as to say (p. 242), "This was how I first acquired the basic techniques of scholarly research."

I recently noticed a minor example of obfuscation in one of the volumes of the Loeb Classical Library, viz. Ovid, Metamorphoses, tr. Frank Justus Miller, 3rd ed., rev. G.P. Goold, Volume I (Cambridge: Harvard University Press, 1977), in the "skinny-dipping" episode (2.453-465, on pp. 90-93), where some of the titillation of the Latin has been removed from the English translation. The nymph Callisto, raped by Jove, has been trying to conceal her pregnancy, but the goddess Diana discovers the truth:


Nine times since then the crescent moon had grown full orbed, when the goddess, quitting the chase and overcome by the hot sun's rays, came to a cool grove through which a gently murmuring stream flowed over its smooth sands. The place delighted her and she dipped her feet into the water. Delighted too with this, she said to her companions: "Come, no one is near to see; let us disrobe and bathe us in the brook." The Arcadian blushed, and, while all the rest obeyed, she only sought excuses for delay. But her companions forced her to comply, and there her shame was openly confessed. As she stood terror-stricken, vainly striving to hide her state, Diana cried: "Begone! and pollute not our sacred pool"; and so expelled her from her company. 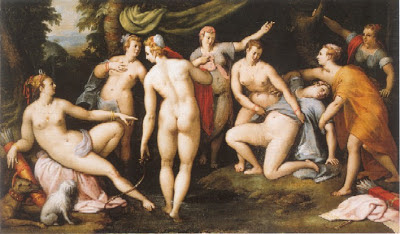 Thanks to the friend who gave me a copy of Expurgating the Classics.