Apples in the Cellar


"Henry, go down cellar, and bring me up some Spitzenbergs." The cellar was as large as the whole house, and the house was broad as a small pyramid. The north side was windowless, and banked up outside with frost-defying tan-bark. The south side had windows, festooned and frescoed with the webs of spiders, that wove their tapestries over every corner in the neighborhood, and, when no flies were to be had, ate up each other, as if they were nothing but politicians, instead of being lawful and honorable arachnidae. On the east side stood a row of cider-barrels; for twelve or twenty barrels of cider were a fit provision for the year,—and what was not consumed for drink was expected duly to turn into vinegar, and was then exalted to certain hogsheads kept for the purpose. But along the middle of the cellar were the apple-bins; and when the season had been propitious, there were stores and heaps of Russets, Greenings, Seeknofurthers, Pearmains, Gilliflowers, Spitzenbergs, and many besides, nameless, but not virtueless. Thence selecting, we duly brought up the apples. Some people think anything will do for pies. But the best for eating are the best for cooking. Who would make jelly of any other apple, that had the Porter? who would bake or roast any other sweet apple, that had the Ladies' Sweeting,—unless, perhaps, the Talman Sweet? and who would put into a pie any apple but Spitzenberg, that had that? 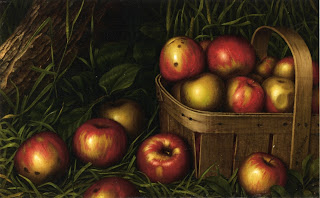