After nursery breakfast—for, incredible as it sounds today, though the family income did not leave room for pocket money, let alone boarding schools for us, we had a nurserymaid as well as a cook and housemaid—mother would come up and take our lessons, beginning with the youngest, who were then free to play when the turn of the elders came. Her technique was, I suppose, that of her own youth. She heard the poetry we had learnt by heart, chosen by ourselves from such poetry books as were available; she corrected our written exercises; she went through the translations we had prepared, she questioned us on the grammar, the history, and the geography books we had read. The first requisite was honesty; we were not allowed to pretend we understood anything if we did not. I can recall early painful strugglings to grasp the meaning of mysterious words like 'the government' or 'the river-basin', and if we had read our history portion carelessly we had to read it again. And we had to be thorough. In our French, for example, when we had got past learning verbs and nouns and were launched into little French story books we had to look up the words for ourselves in the glossary. One sister remembers complaining bitterly that it had taken half an hour to prepare four lines, as there were so many new words to look up; she was told hard-heartedly that it would go quicker in time; and so it did—very soon. Another, trying to skip the difficult words as she translated, remembers mother's needle coming out of the sock she was darning and pouncing down, one after another, on the missing words.

My mother, born in 1857, had learnt her modern languages from the French and German women who helped in my grandmother's small private school. She passed on to us decent foreign accents, but as we grew older we reached the limits of her knowledge of grammar and syntax. She would say: 'I know that's wrong, but I don't know why. Let's look it up'; and with her we would dig into the grammar book and worry out the logic of the correct rendering. By the time we reached our teens our French and German lessons were turning into arguments. We learnt Schiller and Racine by heart; we translated passages from good authors and turned them back again. By the time I got to college I could read history in both languages readily. I remember my early pride when she gave me a French story book to read to myself for amusement.

All the time we were expected to use our minds. If we asked her a question on some general moral or ethical matter she would say: 'What do you think about it yourself?' We lived in an atmosphere of discussion and argument; it was not uncommon for my father to get up from the table at meal times to consult a map or work of reference in order to check some fact. As compared with the schoolchildren of today, I suppose we did far more by ourselves. Lessons with mother did not last more than two hours; preparing them occupied the rest of the morning, and the hours between tea and supper.

The pattern of our curriculum was set by the old Oxford Local Examinations, for which we entered from ten years upwards. We went to Oxford to take them, which meant that examinations were a delightful break in the ordinary routine of life. My B.A. finals in 1907 was the first examination that I did not wholeheartedly enjoy. The wonderful year when an uncle took two of us to Italy with my mother for six weeks in early spring, and lessons went to the wall, did not damage our results, which were even better than usual in July.

There were plenty of books in the house, outside the nursery bookshelves. Reading aloud was a regular institution. Both my father and my mother read very well, and I look back to breathless moments listening to A Tale of Two Cities, and Lorna Doone, or more modern thrillers like Mary Johnstone's By Order of the Company. We had half an hour's sewing after lunch, when one of the four girls in turn read aloud to the other three. Reading aloud persisted in our family to the end of my mother's long life in 1949. My mother, at one period, made me read fiction and non-fiction alternately and keep a record of the books I read. My father's mother (who lived with us till her death in 1902, herself a self-educated scholar of great dignity) gave me on my twelfth birthday a marvellous work called The Treasury of Knowledge, containing half a dozen dictionaries and a choice collection of proverbs (four bordering each page). I revelled in the classical section, from which I compiled genealogies of the gods of Olympus. We still find it handy for crossword puzzles.

The assets that we carried from our home education to the next stage of college or other training were habits of independent working and thinking, standards of thoroughness and a demand for evidence, and, above all, an unspoiled appetite for learning (best, I think, embodied in something my mother said to me when she was over eighty: 'Isn't it nice, Helen, how many things there are still to find out?') I feel that in this we were the heirs of the Victorian age. My mother and her two sisters were educated at home, in my grandmother's little private school, where they also helped to teach. My eldest aunt prepared herself for the Cambridge Higher Locals and so won a scholarship to Newnham, although she did not take it up. To go back to the still older generation, my grandmother's four sisters all went out as governesses when the family fortunes suffered. They had a very different experience from the Brontës, for they became the life-long friends of the families where they taught.

Of the five sisters of the older generation, only my grandmother married; the home of the four great-aunts, where they had lived from childhood, had its own literary associations, as their father had known Coleridge, and in their dining-room, according to tradition, he and Southey had wept at the news of the death of Robespierre. We were not the only children who ransacked their bookshelves.

I do not think we ever considered our family exceptional. When I look at the educational background of the mid-Victorian woman, I keep on recognizing common features. The home teaching on which Charlotte Yonge and Mrs Ewing and Florence Nightingale and Josephine Butler were nurtured is there; so is the passion for reading. Jane Austen wrote that 'a fondness for reading, properly directed, is an education in itself'; and she set the quiet little student Fanny Price over against the complacent and pretentious Bertram sisters, whose schooling is so often quoted as typical. Elizabeth Barrett 'eating and drinking Greek'; Harriet Martineau teaching herself Italian and getting up at 5 o'clock to read Tacitus and Petrarch; Anne Moberley teaching herself Hebrew; Mary Everett Green finding her own way through the scattered and uncalendered national archives—these are simply the outstanding examples from a crowd of less eminent students who one way or another satisfied their hunger for learning. 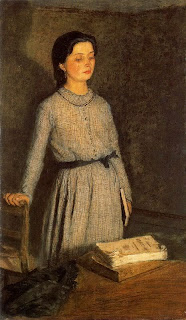