An inscription on a plaque (Figure 1) fixed above the lintel of the entrance to the School of Rhetoric in the time-honoured University of Salamanca (Spain) can be regarded as a kind of motto to the following study. It reads in English translation:


For the purpose of providing ornate and lucid speech for expressing the mind's secret thoughts and tempering them with gracefulness and eloquence, the (academic) senate has opened this School of Eloquence.

Here is Figure 1 from Plett's book (click to enlarge): 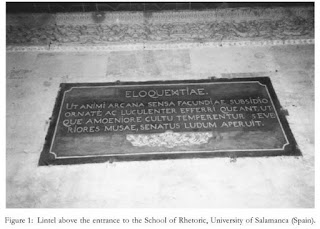 A transcription of the Latin:


So that the mind's secret thoughts can be expressed elegantly and clearly with the aid of eloquence, and so that the sterner Muses can be tempered with a more pleasant aspect, the (academic) senate has opened a school of rhetoric.


We, who cultivate more austere Muses, cannot be so clever.

I've tentatively followed Plett in taking "eloquentiae" as genitive with "ludum," but there is a great distance between the two words, and perhaps "eloquentiae" should be construed as dative standing alone ("to rhetoric") — there seems to be a full stop after ELOQUENTIAE in the inscription, unless my eyes deceive me.


I had a second thought, that "Eloquentiae" might be understood as a genitive of possession with "aedes" understood (cf. the standard example "ad Castoris [aedes]" in the grammar books). But Karl Maurer writes convincingly in an email:


Michael, regarding your charming Salamanca inscription — I think 'Eloquentiae' very certainly genitive with 'ludum'. For 'ludum' really needs to be qualified; and readers were habituated to uniting the beginning and end of a period. The full stop after 'Eloquentiae' is standard renaissance practise; e.g. in Jacob Balde's poem titles there are two hundred examples; e.g. (Lyr. 2.39) "Enthusiasmus. / In coemeterio considerantis mortem ac functorum ossa. / Anno M.DC.XL." = "(The Author's) Rapture in a Cemetery as he contemplates Death in the year" etc.

Regarding your gloss that quotes Martial — "We who cultivate" probably does mean "We stern Spaniards", as your gloss implies. (So "amoeniore cultu" = something like "with a bit more grace".) But you might add that what Martial himself meant was, "We Romans, whose metrical rules are stricter than those of the Greeks". His preceding line has an example of Greek metrical liberty: the word 'Ares' given two different quantities.

For more discussion of the case of "Eloquentiae" see Genitive or Dative?