This sense of personal relation between himself and the men of the past increased as years went on,—as he became less able and willing to mix with the world, and more and more thrown back upon the society which he found in his library. His way of life would have been deemed solitary by others, but it was not solitary to him. While he had a volume in his hands he never could be without a quaint companion to laugh with or laugh at; an adversary to stimulate his combativeness; a counsellor to suggest wise or lofty thoughts, and a friend with whom to share them. When he opened for the tenth or fifteenth time some history, or memoir, or romance,—every incident, and almost every sentence of which he had by heart,—his feeling was precisely that which we experience on meeting an old comrade, whom we like all the better because we know the exact lines on which his talk will run. There was no society in London so agreeable that Macaulay would have preferred it at breakfast or at dinner to the company of Sterne, or Fielding, or Horace Walpole, or Boswell; and there were many less distinguished authors with whose productions he was very well content to cheer his repasts. "I read," he says, "Henderson's Iceland at breakfast; a favourite breakfast book with me. Why? How oddly we are made! Some books which I never should dream of opening at dinner please me at breakfast, and vice versâ." 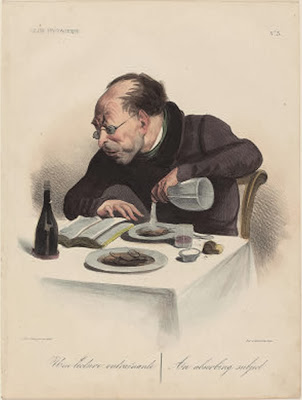