Visit to a Book Store


"Can I—was there any particular book you wished to see?"

"I mean Taine—if I may take the liberty."

"No, it isn't hymns. It is a volume that is making a deal of talk just now, and is very widely known—except among parties who sell it."

Then she asked the clerk for the Autocrat of the Breakfast Table—and was pained to see the admiration her beauty had inspired in him fade out of his face. He said with cold dignity, that cook books were somewhat out of their line, but he would order it if she desired it.

"Have you ever read this, ma'm? I am sure you'll like it. It's by the author of 'The Hooligans of Hackensack.' It is full of love troubles and mysteries and all sorts of such things. The heroine strangles her own mother. Just glance at the title please,—'Gonderil the Vampire, or The Dance of Death.' And here is 'The Jokist's Own Treasury, or, The Phunny Phellow's Bosom Phriend.' The funniest thing!—I've read it four times, ma'm, and I can laugh at the very sight of it yet. And 'Gonderil,'—I assure you it is the most splendid book I ever read. I know you will like these books, ma'm, because I've read them myself and I know what they are."

"Many people would think that what a bookseller—or perhaps his clerk—knows about literature as literature, in contradistinction to its character as merchandise, would hardly, be of much assistance to a person—that is, to an adult, of course—in the selection of food for the mind—except of course wrapping paper, or twine, or wafers, or something like that—but I never feel that way. I feel that whatever service you offer me, you offer with a good heart, and I am as grateful for it as if it were the greatest boon to me. And it is useful to me—it is bound to be so. It cannot be otherwise. If you show me a book which you have read—not skimmed over or merely glanced at, but read—and you tell me that you enjoyed it and that you could read it three or four times, then I know what book I want—"

This reminds me of the book store I once visited in which Walt Whitman's Leaves of Grass was shelved in the botany section. 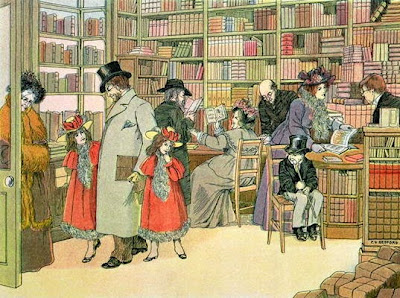 
Reminds me of the time I worked in a bookstore in downtown Cleveland (1975) and copies of a new translation of The Iliad arrived. On the cover was a stylized drawing of the Trojan horse. The assistant manager (a cousin of the owner) told me to shelve it in Equine Science. I was happy to oblige.


I once found, at Moe's Books here in Berkeley, George MacDonald's copy (attractive bookplate after Wm. Blake) of Thomas Dekker's The Gull's Horn-Book shelved in the Ornithology section.