The key of the higher cipher was next to impossible to discover. It was provided by the first hundred lines on the first book of the Iliad, which had to be read concurrently with the writing of the cipher, each letter in the writing being represented by the number of letters of the alphabet intervening between it and the corresponding letter in Homer. Thus the first letter of the first word of the first line of the first book of the Iliad is Mu. Suppose the first letter of the first word of an entry in the dossier to be Upsilon. There are seven letters in the Greek alphabet intervening between Mu and Upsilon so Upsilon would be written as 7. In this plan the alphabet would be thought of as circular, Omega, the last letter, following Alpha, the first, so that the distance between Upsilon and Alpha would be 4, but the distance between Alpha and Upsilon would be 18. It was Augustus's invention and must have taken rather a long time to write and decode, but I suppose by practice they came to know the distance between any two letters in the alphabet without having to count up, which saved a lot of time. And how do I know about all this? Because many many years later when the dossiers came into my possession I worked the cipher out myself. I happened to find a roll of the first book of Homer, written on sheepskin, filed among the other rolls. It was clear that the first hundred lines only had been studied; because the sheepskin was badly soiled and inked at the beginning and quite clear at the end. When I looked closer and saw tiny figures—6, 23, 12—faintly scratched under the letters of the first line, it was not difficult to connect them with the cipher. I was surprised that Tiberius had overlooked this clue.


In Robert Graves, I, Claudius (New York: Modern Library, n.d.), a sophisticated cipher system equivalent to a Vigenere table keyed by a selected text is ascribed to Augustus. Correspondence with the author has failed to uncover any classical source for this method; however, Charles J. Mendelsohn, "Blaise de Vigenere and the 'Chiffre Carre,'" Proceedings of the American Philosophical Society, No. 2 (March 1940), 126, has traced this system to G.B. Belaso in Italy in 1553. 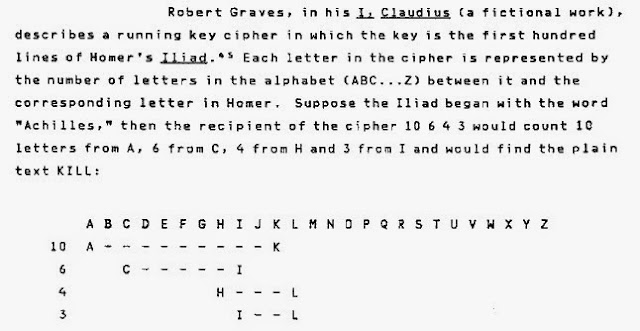 
It looks to me as if Graves created a cipher system in a way no Roman would have done, not because it is too advanced and wasn't thought of in the real world for another fifteen centuries, but because the counting is wrong, and can't easily be made to fit in with Roman concepts of number intervals. There are indeed seven letters between mu and upsilon, but there are no letters between mu and nu – and the Romans didn't have a zero symbol; even worse, there are also no letters, or perhaps minus one letter, between mu and itself; and that problem would occur every time the letter in the cipher text matched the letter in the Iliad. If the Romans had used such a system they would have counted inclusively, as they did in their calendar, and the problem would have gone away: they would have counted 1 as the distance between mu and itself, 2 for mu and nu, and thus the mu – upsilon distance would have been 9.