Refuge from the World of Everyday


And on summer evenings he would ride his bicycle about the country, and if he discovered a sale where there were books he would as often as not waste half the next day in going again to acquire a job lot of them haphazard, and bring them home tied about with a string, and hide them from Miriam under the counter in the shop. That is a heartbreaking thing for any wife with a serious investigatory turn of mind to discover. She was always thinking of burning these finds, but her natural turn for economy prevailed with her.

The books he read during those fifteen years! He read everything he got except theology, and as he read his little unsuccessful circumstances vanished and the wonder of life returned to him, the routine of reluctant getting up, opening shop, pretending to dust it with zest, breakfasting with a shop egg underdone or overdone or a herring raw or charred, and coffee made Miriam's way and full of little particles, the return to the shop, the morning paper, the standing, standing at the door saying "How do!" to passers-by, or getting a bit of gossip or watching unusual visitors, all these things vanished as the auditorium of a theatre vanishes when the stage is lit. He acquired hundreds of books at last, old dusty books, books with torn covers and broken covers, fat books whose backs were naked string and glue, an inimical litter to Miriam.

But he read all sorts of things; a book of old Keltic stories collected by Joyce charmed him, and Mitford's Tales of Old Japan, and a number of paper-covered volumes, Tales from Blackwood, he had acquired at Easewood, remained a stand-by. He developed a quite considerable acquaintance with the plays of William Shakespeare, and in his dreams he wore cinque cento or Elizabethan clothes, and walked about a stormy, ruffling, taverning, teeming world. Great land of sublimated things, thou World of Books, happy asylum, refreshment and refuge from the world of everyday! 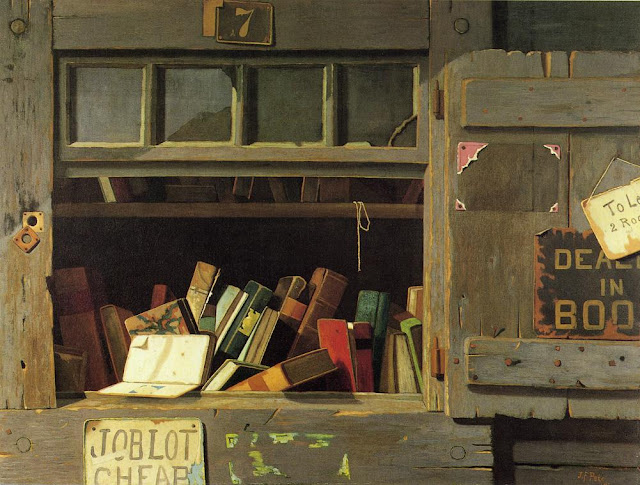