You try to hide your belly's wrinkles with beanmeal,
Polla, but you smear your stomach, not my lips.50
Better that the blemish, perhaps a trifling one, be frankly shown.
Trouble concealed is believed to be greater than it is.

50 Os sublinere, "smear the face," meant to make a fool of, as practiced on someone drunk or asleep.


You wish to have an amour with me, and yet you do not wish, Saufeia, to bathe with me;
I suspect that some monstrous blemish is in question.
Either your dugs hang in wrinkles from your bosom,
or you fear by nakedness to betray the furrows in your belly...

Were the ventral wrinkles of Polla and Saufeia stretch marks or fat folds? If the latter, not everyone considered them blemishes. See Mark Bradley, "Obesity, Corpulence, and Emaciation in Roman Art," Papers of the British School at Rome 79 (2011) 1-41 (at 12):


In particular, it is in the 'Crouching Aphrodite', a third-century BC Hellenistic prototype that was widely copied, imitated and adapted in Roman art, that we can detect the most striking exhibition of voluptuous fat.40 The very pose in which she is represented purposefully is designed to amplify these features, and sculptors reproducing the 'Crouching Aphrodite' had licence to exaggerate these details further: a Hadrianic copy from Tivoli, for example, exhibits no fewer than six fleshy folds as she crouches over (Fig. 2).41 These adipose rolls signal the playful sculptural animation that makes the upright Knidian Aphrodite crouch down, and indicate just how lifelike the subject has become; but at the same time her nude fleshiness feeds directly into a story about female fertility. 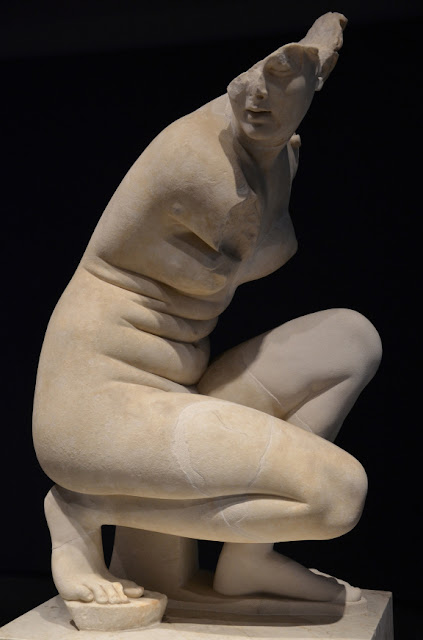