For their only care was not to destroy any institution of their fathers and to introduce nothing which was not approved by custom, believing that reverence consists, not in extravagant expenditures, but in disturbing none of the rites which their ancestors had handed on to them. And so also the gifts of the gods were visited upon them, not fitfully or capriciously, but seasonably both for the ploughing of the land and for the ingathering of its fruits.

In the Digital Loeb Classical Library there is a misprint in the last word (καρπῶν is corrupted to καρῶν), as the following screen capture shows: 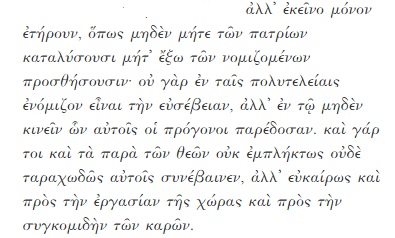 The mistake does not occur in the physical book (1929 edition).