Luther playfully invented nicknames for his enemies. There was the plodding Hieronymus Düngersheim von Ochsenfahrt, who became "the ox"; Emser was dubbed the goat, Eck the fool, Alveld the donkey, Pope Leo "that wolf," and the theologians became the "asses" of Louvain and Cologne. He punned with the name of his adversary, Thomas Murner, christening him the "cat fool" (Mur means "tomcat" in German, and Narr means "fool"). It made excellent cartoon material, and soon their grotesque portraits decorated the cheap pamphlets. Turning one's opponents into animals denies them the status of worthy intellectual antagonists, and laughter removed some constraints on aggression — on both sides. 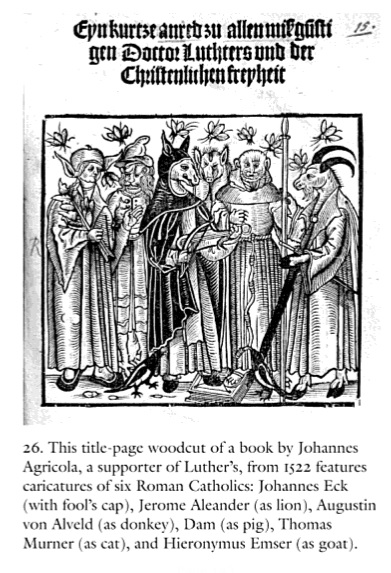 To my mind, the full name Hieronymus Düngersheim von Ochsenfahrt (usually without the umlaut) is funnier than the nickname, mostly because of the English homophones.