One cannot read the narrative without recalling Oxenstjerna's saying to his son: "My son, as you grow older, you will be astonished to discover what imbeciles run the world."1

1 In A New Dictionary of Quotations, under the rubric "Government," Mencken gives this saying as "You do not know, my son, with how little wisdom the world is governed (An nescis, mi fili, quantilla prudentia mundus regatur)," and then adds: "Commonly ascribed to BISHOP AXEL OXENSTJERNA, Chancellor of Sweden (1583–1654), but Büchman says in Geflügelte Worte that it probably originated with Pope Julius III, who said to a Portuguese monk: 'If you knew with how little expenditure of sense the world is governed, you would wonder.'" 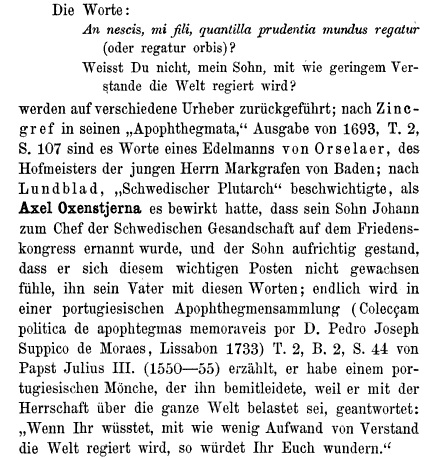