As regards punishment, I strongly recommend giving a fellow a thrashing, the fellows like it best themselves—better than setting impositions or reporting. Setting impositions is essentially weak, and shams master too much: I should only recommend it in the case of fellows so little, or so weak, you did not like to thrash them, or as an addition to a thrashing when you felt the latter was not enough. For drunkenness and beastliness (also for bullying and stealing, of course) thrash a fellow at once, as hard as ever you like—you cannot give him too much; but let me recommend that no fellow be thrashed by any of you hastily or in a passion, but that before thrashing a fellow you consult some of your brother monitors. Remember, never thrash a fellow a little, always hard: and it is always well that he be thrashed by more than one of the monitors.

If this were a classical text, I might obelize "shams master," as I suspect it is corrupt.


I would have to protest your obelization. "Shams" could be the verb "to sham" in the sense of "to sham illness". The advice is given to a monitor, and the Bishop refers to, I believe, an action that savors of a monitor acting as a sham master towards the other boys.]

When I was in seventh grade, a teacher slammed me against a locker in the hallway. I hadn't done anything wrong, but I didn't protest because:


1) On many other occasions I had done something wrong, without being caught.

2) If I had complained to my parents, they would have punished me a second time. Teachers, in the opinion of my parents, were always in the right. 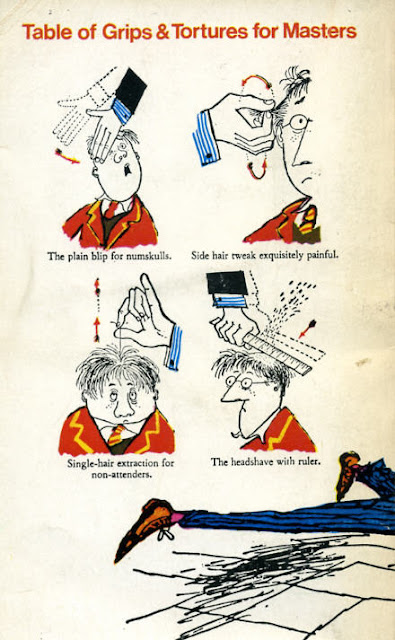 Ouch! It was as bad at home. Here is a passage from the memoirs of Creighton's wife:


I do not think that I had much difficulty in managing the children, though of course there was a good deal of quarrelling & temper at times. I tried to make punishments fit the offense as Herbert Spencer enjoined, & I always objected to anything of the nature of a judicial punishment. Some of my punishments may be considered brutal by some people. Cuthbert was a very mischievous boy, & used to play with fire & cut things with knives, so when he played with fire I held his finger on the bar of the grate for a minute that he might feel how fire burnt, & when he cut woodwork with his knife I gave his fingers a little cut. I never whipt any child.