DEDICATION.
TO
the Red-Headed Cerberus, regardant between the Pont Royal and
the Petit-Pont; to the Frothing Vorticist; to the Harpy behind
the Little Grille; to the Bilious but Gaitered Platonic; to
the Surgical, Hairy, yet invisible Troll of the Dieppois; to
the Stout Love-Child of the Pierides who Believes Aquinas
to be a Mineral-Water; to the Bouncing Benthamite of
Bloomsbury who is Unaware of the Medieval; to That
Other, the Cramoisy One; to the Dodging Lutheran
of the Rue de Grenelle; to the Pythoness of Bays-
water; to the Commandant of Infantry who Babbled
of the Grand-Orient; to the Lady with the Hard
Grey Eyes; to the Levantine of London who Did
Not Think Poetry Would Do; to the Military
Character who Sacked the Lot; and to all pratt-
ling Gablers, sycophant Varlets, forlorn Snakes,
blockish Grutnols, fondling Fops, doddi-
pol Joltheads, slutch Calf-Lollies, cods-
head Loobies, jobernol Goosecaps,
grout-head Gnat-Snappers, noddie-
peak Simpletons, Lob-Dotterels,
and ninniehammer
Flycatchers,
THIS,
IN DERISION. 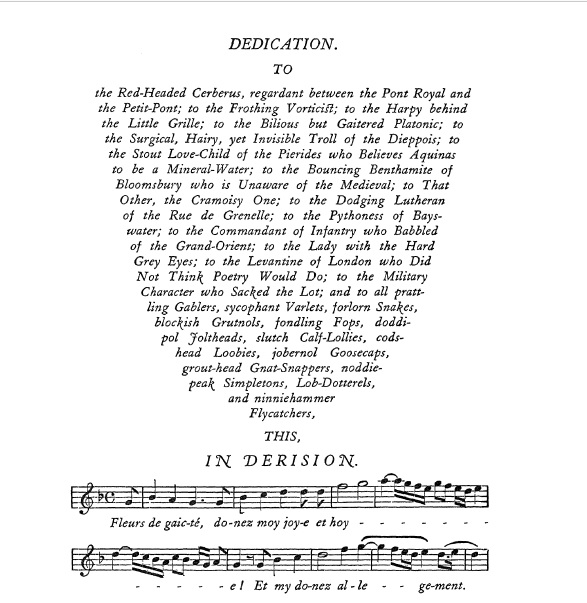 Some of this is borrowed from Urquhart's translation of Rabelais, Book I, Chapter XXV.

Robert G. Eisenhauer's Archeologies of Invective (Peter Lang, 2007) quotes the Villon dedication, identifying the "Red-Headed Cerberus" as Ezra Pound and the "Frothing Vorticist" as Wyndham Lewis. Unfortunately he fails to realize that there are two Wyndham Lewises, and that the Wyndham Lewis who wrote Villon is not the Vorticist. He is therefore obliged to invent an elaborate scenario to explain away the dedication (p. 22):


As the dedicatory language makes clear, the derogatory connotation of "blackguards both" is negated in the affirmation of an avant-garde which includes both himself and Ezra Pound. Thus the "slings and arrows" become epithets of highest praise. Lewis's elaborate, Vergilian, Henrysonian characterization of Pound on the dedication page of his study exemplifies the chaffing owed by one avant-garde "good fella" to another, an intemperance studied from Villon and Dunbar and made new in the context of Vorticist assaults on academic self-satisfaction.

Incidentally, "the Bilious but Gaitered Platonic" is obviously Dean Inge.