Septimius, you would go with me to Cadiz, and to the Cantabrian who has not yet learned to bear our yoke, and to the wild Syrtes where the Moorish surf boils for ever.

Let me have Tibur, founded by an Argive settler, as the home of my old age; let that mark the end for one who is weary of the sea and of marching and fighting.

If the Fates are unkind enough to deny me that spot, I shall make for the river Galaesus (so sweet to the sheep in their leather jackets), and for the countryside once ruled by the Spartan Phalanthus.

For me that corner of the world smiles more invitingly than all others. There the honey is not inferior to Hymettus, and the olive rivals green Venafrum;

there Jove sends a long spring and mild winters, and Aulon, a valley beloved of prolific Bacchus, has no cause whatever to envy the grapes of Falernum.

That place with its happy stronghold beckons to you and me; there you will duly drop a tear on the warm ashes of your poetic friend.


Gades (Cadiz) is at the ends of the earth in the south-west corner of Spain beyond the pillars of Hercules. The Cantabrians in north Spain had always resisted the Romans. Augustus himself fought bitter campaigns against them in 26-25 BC, but they were not finally subdued until 20 BC by Agrippa. The Syrtes are the sandbanks on the Libyan coast, scene of the fearful storm of sand and sea at the beginning of Virgil's Aeneid, which was being written when his friend Horace produced these odes in 23 BC. Septimius would think nothing of going with his friend to any or all of those remote places, but this is a feint. Horace has something less arduous in mind.

Tibur is the wealthy and spectacularly beautiful resort up in the hills 15 miles east of Rome, not violent like Spain or barbarous like North Africa, but founded by Tiburnus from Argos, a farmer-settler, colonus, suggesting Greek civilization and rural peace. Horace sums up in lines 7-8. He is tired of travel by sea and land and wants no more to do with war. Those who know him will think of his voyages to Athens to complete his education; the voyage back on which he suggests in Odes 3.4.28 that he was nearly drowned off Cape Palinurus; the rigours of the journey to Brundisium of Satires 1.5 (but he must have taken many like it); and his traumatic involvement in the battle of Philippi, about which we shall hear in the next ode.

Failing Tibur, his second choice would be Tarentum, a colony of Sparta founded according to tradition by the Laconian Phalanthus in 708 BC (Laconia is the south-east area of the Peloponnese, governed by Sparta). Instead of the ever-seething ocean, he would have the Galaesus, a river sheep can drink from and find sweet (gala is the Greek for milk), and these are no ordinary sheep. Their wool was so precious that they wore leather coats to protect it. Herodotus gives an example of similar care in wool production in antiquity at 3.113.1-2, where he tells us that some Arabian sheep had such long tails that they were supported on wheeled trolleys. If any scepticism remains, it may be countered by the note in How and Wells's commentary, referring to the ovis stealopyga of Pallas in Asiatic Russia: 'Its tail is said in some cases to weigh over 70 lbs.; it is still at times protected by wheeled boards. (Woods, Natural History)'. Again, instead of violence Horace looks for a settled countryside; instead of barbarism, one of the ancient Greek foundations in south Italy, which was known as Magna Graecia, and one with honey as good as the fabled honey of Hymettus, the hill of Athens, olives as good as those from Venafrum in central Italy, and wine from the sheltered vineyards of Aulon (aulon is the Greek for a glen) as good as Falernian, one of the best of the Italian wines.


The photograph attached will show you what I was looking for and found this afternoon: after 2000 years, a locus not quite now so amoenus, with a busy autostrada passing almost overhead, a vast petrochemical complex not far behind, eucalyptus trees (which would have bemused Horace and Vergil) elbowing out the pines, and instead of jacketed sheep, a pair of vicious dogs belonging to the fishermen nearby, but for all that, the Galaesus hasn't entirely lost its charm. 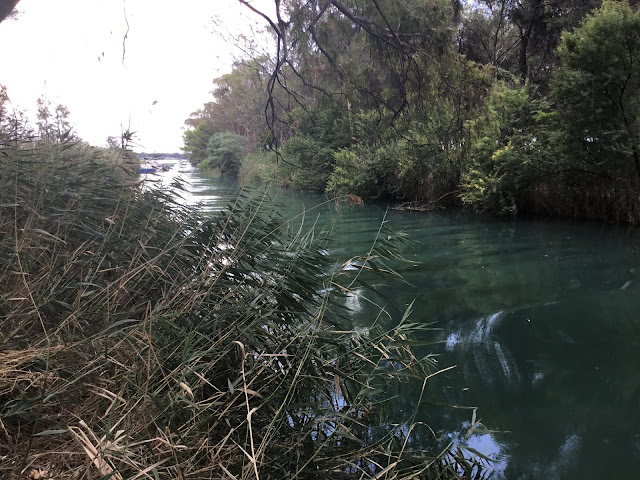