A World of Peace and Calm 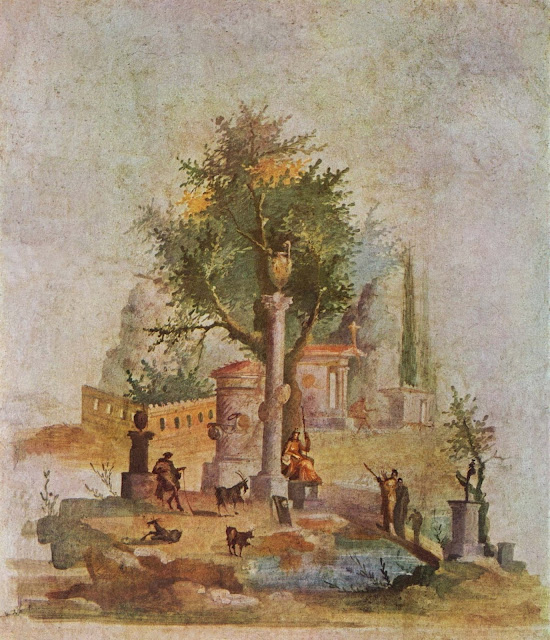 
Pietas is also the principal message of the novel landscape scenes with predominantly sacred and bucolic subject matter that were introduced along with the new decorative system and appear on many walls of the Candelabra Style (fig. 224c). These carry the viewer off into a world of peace and calm. Meadows and ancient trees, rocks and streams, here and there fishermen or shepherds with their flocks, as well as satyrs and nymphs, evoke thoughts of the carefree life in "unspoiled nature," though in reality the compositions consist of parklike settings with garden architecture, little temples and colonnades, even villas in the background. The focal point is always an artfully constructed shrine, with small sanctuaries, votive offerings, and statues of the gods, before which stand worshippers performing a sacrifice. Of the latter some are simple country folk, others festively attired priestesses. In this setting even the satyrs leave their maenads unmolested and instead piously bring offerings to Dionysus or Priapus.

The pastoral idyll was in fact already part of the thematic repertoire of earlier wall painting, but merely as a genre scene, one of several kinds of landscape. Now it becomes the principal subject, and always associated with statues of divinities, altars, votives, and cult activities. At least as early as Vergil's poetry the bucolic world had been burdened with "political" symbolism. In the Georgics, the simple life of Romulus and his shepherds, its unspoiled piety, is celebrated. For other Augustan poets as well, the pas­toral idyll always represents a longing for escape from city life, with its daily stress, ostentation, and moral decay (e.g., Horace Epodes 2.1.140). Ever since the happy shepherd and his peacefully grazing flock had become symbols of the saeculum aureum, visual imagery focused on the praise of simplicity and unaffected piety, turning the subject into a deliberate metaphor. We need only recall the grazing animals in the Pax relief on the Ara Pacis (cf. fig. 136).

The little landscapes are remarkably constructed. The individual elements do not compose a unified pictorial space, but are simply set beside one another, as in Chinese landscape painting. As a result the views have a peculiar, floating quality, and the lack of a frame gives them the character of a vision or epiphany. Artists were more concerned with communicating a certain atmosphere than with rendering specific details.

But these new idylls are full of contradictions. In this highly sophisticated society, sated in luxury, painters could only imagine the simple pastoral life against a background of elegant parks and villas. The simple stone altar stands in front of extravagant and exotic religious architecture and lavish votive offerings. These views of country landscape never reveal Roman peasants at work or the fertile Italian soil so rapturously celebrated by Vergil. We see only satyrs vintaging, not men and women. This vision of agriculture is unencumbered by the Augustan moral campaign, which only succeeded in redefining the imagery of escape into a world of otium. In place of the almost palpable luxury of the Late Republic, we are presented with nostalgic visions combining the very real urge for a quiet weekend in the country villa with the imagined longing for a simpler and harmonious way of life.