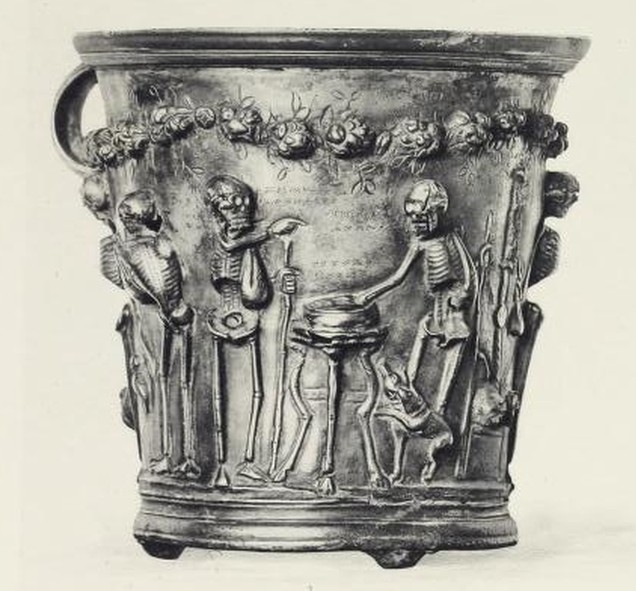 
On a goblet found in Boscoreale two philosophers are depicted as skeletons: Zeno the Stoic, and Epicurus. According to the inscription on the goblet they are engaged in discussion as to whether pleasure is the goal of all actions (telos).2 It is clear from Zeno’s attitude that he is eagerly trying to persuade Epicurus. Epicurus is depicted in a rather more casual pose. His attention is concentrated less on the person opposite him than on a piece of cake lying on a table in front of him. This scene encapsulates the popular image of the two schools in a mixture of true insight and false understanding. The contrasting attitudes of the two philosophers in fact symbolize a fundamental distinction between Stoa and Garden: Zeno’s tense bearing is appropriate as a representation of the Stoic school, whilst the casual pose suited the Epicureans. The Epicureans believed it was folly to dwell in the mind on evils which might possibly occur or have already occurred. In their view this leads to aggravation of our distress. Alleviation will result if as well as taking our minds off what troubles us (avocatio a cogitanda molestia) we give our attention to what brings pleasure (revocatio ad contemplandas voluptates) (Cic. Tusc. III.32–3). But it is equally interesting to consider the misconception of Epicurean ethics which is suggested by the scene on the goblet. Epicurus allows himself to be distracted by a piece of cake; he is thus presented as honouring physical pleasures. As if to confirm this interpretation, at his feet a piglet is depicted, reminiscent of Horace's ironic description of himself as 'a true hog of Epicurus' herd' (Hor. Ep. i.4.16).