I Completely Forbid This


A fifth-century BC oracular inscription from the temple of Zeus Epikoinios in the Greek city of Salamis on the island of Cyprus is written on a shard of pottery, employing Cypriot letters to express Greek words.46 Two distinct sections or areas of writing are legible. There is a short piece of prose: 'Decision of the god. I completely forbid this: the little creek must flow', written around the edge of one side of the ostrakon. There is also a longer piece of writing, written in neat lines of verse:


I admire this zeal of yours, and yet, while I am gracious,
With lightning I strike my enemies down.
Through the rivulets of the stream
I receive sweet water for my cattle
and pastures in the springtime.
I am angered by this request,
which the one who is asking seeks.

Consequently, it would seem that the ostrakon represents the decision of the god in response to an oracular enquiry, the answer expressed quite clearly in prose, and then with an elaboration on the god’s decision, expressed more fully but in verse this time, and explaining his ruling. Our enquirer must have asked if a stream could be altered in some way: perhaps dammed, or even redirected. Apparently it flowed by or even through the sanctuary of Zeus Epikoinios, and therefore it was clearly a matter for the god, whose permission needed to be sought for any such change.

References are to:
Images of the text from Meister, p. 309 (verse first, then prose): 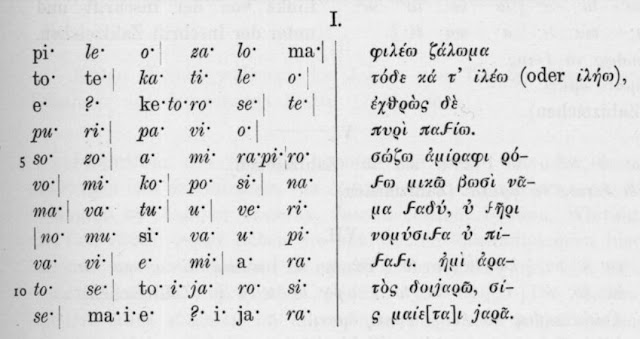