While, in Rome, new religions had arisen with bewildering complexity around the dying old one, the earlier and simpler patriarchal religion, "the religion of Numa," as people loved to fancy, lingered on with little change amid the pastoral life, out of the habits and sentiment of which so much of it had grown. Glimpses of such a survival we may catch below the merely artificial attitudes of Latin pastoral poetry; in Tibullus especially, who has preserved for us many poetic details of old Roman religious usage.

—he prays, with unaffected seriousness.


And be it mine many times to stand before the shrine of my sires' Penates and offer incense, as the months come round, to the old Lar of my home.


For the Romans all the associations of our word home were in these lines.

See Harriet I. Flower, The Dancing Lares and the Serpent in the Garden: Religion at the Roman Street Corner (Princeton: Princeton University Press, 2017), pp. 40-45 (on "Monthly Rituals at the Hearth"). 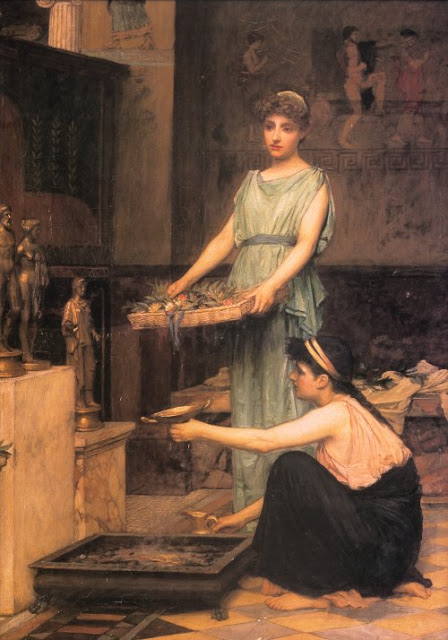