The Bird That Fouls Its Nest


As far as is known, the proverb, "It is an ill bird that fouls its own nest," was first recorded in Latin by Egbert von Lüttich in verse 148 of his Fecunda Ratis. There it reads: nidos commaculans immundus habebitur ales.

Nor do I have access to Egbert of Liège, The Well-Laden Ship, tr. Robert Gary Babcock (Cambridge: Harvard University Press, 2013 = Dumbarton Oaks Medieval Library, 25), but I would translate the line as follows:


A bird fouling its nest will be considered unclean.

The reason for the accusative plural nidos is unclear to me, because the singular nidum would scan just as well, unless the meaning is that the bird does this repeatedly, fouling one nest after another. 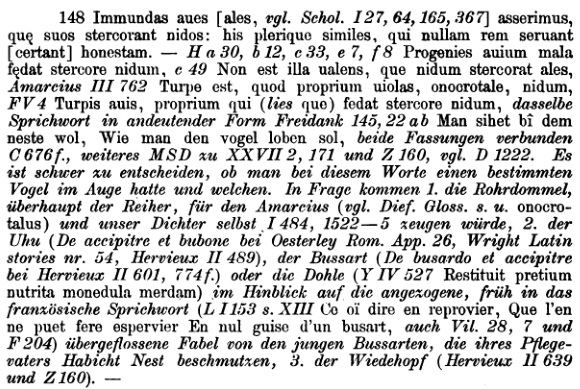 One way birds do keep their nests clean is by means of fecal sacs. My son, Laudator Junior, has observed this, captured it on video, and commemorated it in rhyming quatrains addressed to an ornithologist friend.