While I continued in that country, although I was well treated, I often wished myself away, thinking of my friends in Florence,—of music, of painting, of our villegiatura at the vintage-time; whether in the green and narrow glades of Pratolino, with lofty trees above us, and little rills unseen, and little bells about the necks of sheep and goats, tinkling together ambiguously; or amid the grey quarries or under the majestic walls of ancient Fiesole; or down in the woods of the Doccia, where the cypresses are of such a girth that, when a youth stands against one of them, and a maiden stands opposite, and they clasp it, their hands at the time do little more than meet. Beautiful scenes, on which Heaven smiles eternally, how often has my heart ached for you! He who hath lived in this country, can enjoy no distant one. He breathes here another air; he lives more life; a brighter sun invigorates his studies, and serener stars influence his repose.

I thought you might be interested, although you're probably already very well aware, in how closely the passage you quote from "Fra Filippo Lippi and Pope Eugenius the Fourth" matches Landor's own Florentine experience. Attached are photographs I took in January 2016 of his grave (he'd have appreciated the pomegranate) and his Fiesole villa, as much at any rate as the trees permitted. 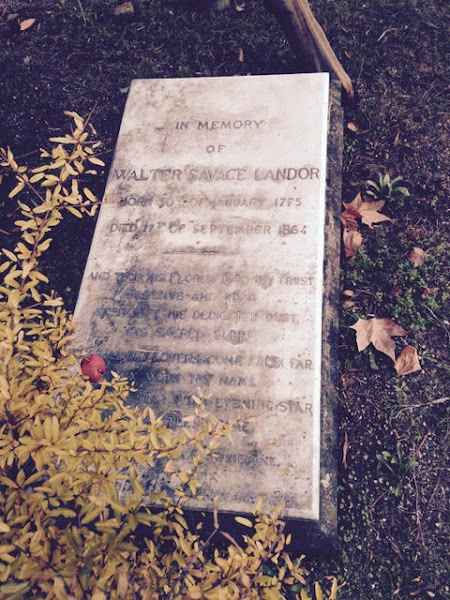 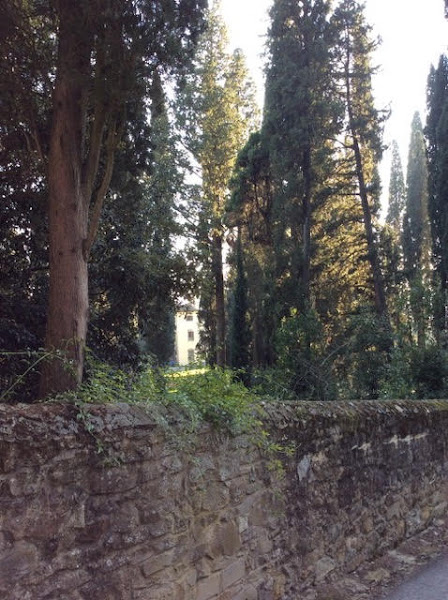 From France to Italy my steps I bent,
And pitcht at Arno's side my household tent.
Six years the Medicaean palace held
My wandering Lares; then they went afield,
Where the hewn rocks of Fiesole impend
O'er Doccia's dell, and fig and olive blend.
There the twin streams in Affrico unite,
One dimly seen, the other out of sight,
But ever playing in his smoothen'd bed
Of polisht stone, and willing to be led
Where clustering vines protect him from the sun,
Never too grave to smile, too tired to run.
Here, by the lake, Boccacio's fair brigade
Beguiled the hours, and tale for tale repaid.
How happy! O, how happy had I been
With friends and children in this quiet scene!
Its quiet was not destined to be mine:
'Twas hard to keep, 'twas harder to resign.

Once we drove up to aerial Fiesole; and never can I forget Landor's manner while in the neighbourhood of his former home. It had been proposed that we should turn back when only half way up the hill. Ah, go a little farther, Landor said nervously; I should like to see my villa. Of course his wish was our pleasure, and so the drive was continued. Landor sat immovable, with head turned in the direction of the villa Gherardesca. At first sight of it he gave a sudden start, and genuine tears filled his eyes and coursed down his cheeks. There is where I lived, he said, breaking a long silence and pointing to his old estate. Still we mounted the hill, and when, at a turn in the road, the villa stood out before us clearly and distinctly, Landor said, Let us give the horses a rest here! We stopped, and for several minutes Landor's face was fixed upon the villa. There now, we can return to Florence, if you like, he murmured finally with a deep sigh. I have seen it probably for the last time. Hardly a word was spoken during the drive home. Landor seemed to be absent-minded.

A tragedy lies underneath those few sentences of which every scene had been bitterly acted out, though not a line of it can be written here.

What follows in Field's letter, omitted in the biography, can be found in Lilian Whiting, The Florence of Landor (Boston: Little, Brown, and Company 1912), pp. 288-289:

A sadder, more pathetic picture than he made during this memorable drive is rarely seen. 'With me life has been a failure' was the expression of that wretched worn face. Those who believe that Landor was devoid of heart should have seen him then.